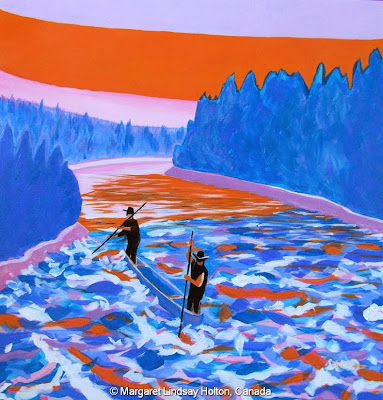 'Running the Rapids'
Contact artist for more info re: price and size.

A Picnic on the High Level Bridge? Do We Dare?


A new hashtag recently emerged on Twitter, #ambitioushamont, that bolsters the Hamilton Economic Development Office's latest promotional efforts on behalf of the City of Hamilton. A companion video is pumping a somewhat machismo 'New City Vision!' that shouts out the 'ambitious' future of the City built on the back of its industrial core.  As of noon, Oct.28th, that newly launched video had been seen over 18,300+ times. Not too shabby branding.

The Hamilton Economic Development webpage now lists members of the 'creative industry' as the "top tier of innovation" in the "health, technology and engineering" sectors. The push is clearly on to court national and global investors to put their capital into this City's necessary transformation from an industrial giant to a hotbed of audacious high-tech innovation with a progressive forward-thinking future.

Yet, what happens when an innovative press-grabbing IDEA appears out of the ether that would irreversibly transform the City for the Better in more ways then one? Who - and/or what - will actually turn that idea into reality?

On August 13th, 2013, CBC Hamilton ran an intriguing story about just such an idea put forward by a fourth-generation industrialist with deep roots in the region, Patrick Bermingham. In short, what Patrick wants to do is have a picnic on York Boulevard, on the High Level Bridge.

Why would we do that?

As he says, "Close the bridge. Just for an evening. Then let the people take over. Let them bring their picnic baskets and enjoy the peace, the panorama and, the Gods permitting, a sunset."  The point, according to Patrick, is to celebrate and appreciate what this City really has to offer.

YES! What a wonderful way to "embrace the city". Visually, there's the humming industrial harbour to the East, and to the West, the sculpted natural bounty of Cootes Paradise. Enveloping all is an unparallel panoramic view of the Niagara Escarpment. It's one of the best and most welcoming views of the entire City and, hypothetically, a riveting spot for a leisurely picnic to absorb the lovely setting sun over Cootes Paradise.

Very few seldom take the time to appreciate this unique vantage as they speed along the boulevard into or out of the downtown core. Patrick's wants to change that, if for only just a few hours.
In the light of the avowed re-purposing of the 'ambitious City', what has happened to this ambitious IDEA? Last week I phoned Patrick to find out.

First, where did this idea come from? Apparently, while in conversation with his older sister, Susan Jasper, ( founder of the now wildly successful  'Telling Tales' children's authors' festival held at Westfield Heritage Village ) , the siblings got talking about 'fundraising' in general. Specifically, it evolved to a discussion about how could they raise funds for Susan's latest philanthropic venture - the Cootes to Escarpment Ecopark System. She has joined the fundraising 'camp'.

The Cootes to Escarpment Ecopark System has been percolating since 2007, with initial exploratory funding supplied by the Friends of the Greenbelt Foundation. A Memorandum of Understanding (MOU) was formally signed between the 10 partnering organizations earlier this past summer. Those partners now include Conservation Halton, Hamilton Conservation Authority, the Royal Botanical Gardens, the Cities of Burlington and the City of Hamilton, the Region of Halton, the Hamilton Naturalists' Club, McMaster University, and the Bruce Trail Conservancy.

Their combined mission is "to collaboratively continue preserving and enhancing the natural lands using a sustainable approach that balances natural ecosystem health with responsible human appreciation and activities to achieve the vision."

Their mission is built on the vision that the proposed Ecopark: "will be known internationally as a protected, permanent and connected natural lands sanctuary from the Harbour to the Escarpment that promotes ecosystem and human health within Ontario’s Greenbelt. "

Overall, it is certainly a noteworthy and ambitious plan of conservation and rejuvenation that has profound long term business, tourist and resident ramifications for the entire region.

YES! The picnic on the bridge now has an #ambitioushamont purpose: raising funds for the Ecopark.

To test this plan Patrick invited the Mayor to attend a breakfast on the bridge to discuss the potential site as a "fundraising venue".  As Patrick reasoned, the city closes the road for the hugely popular Around-the-Bay running race. So why not this? Mayor Bratina  'got it' and has subsequently suggested that the summer solstice, June 21st, 2014, would be an opportune evening to hold the event.  So, seemingly, the City is more or less 'on board'.

Yet, the nagging particulars remain ... Who would come, how much would it cost to attend, who would cater? Would it be 'dry' or 'wet' event? What would it cost the City? Who would do the heavy lifting to get this event up and running?  I grilled Patrick on these issues.

By necessity, to raise funds for the Ecopark, the 'picnic' would have to be a ticket-only or private affair. Patrick did, however, seem agreeable to opening it up, allowing the necessary 'fundraising' through sponsorship pledges. As he says, HOW it's actually done is of little concern to him, "he's the IDEA man" and hey, wouldn't it just be grand to have a "big party" up there on the bridge?

When pressed on details, he reiterated that he's not really the "executioner", what he's done has put the idea on the table. What he hopes will happen is that other interested persons or groups will "take over and run it." His one fear though is that some groups might attempt to hi-jack the idea of closing the bridge. He has no wish to see the 'Sunset Picnic on the High Level Bridge' turn into a vendor-heavy noisy rock-n'-roll music "circus". The primary purpose, after all, is for patrons to slow down and enjoy the exquisite view ...

In answer to my continued questions about accessibility and cost, Patrick was rather vague. He concluded our conversation by saying that my questions were acting as an impetus to organize and implement the idea. He promised he would email with additional information last Friday. I emailed him on Sunday asking again for those outstanding details. I haven't heard from him. Yet.

As it stands today, I'm still not 100% sure if this idea is incubating, percolating or if it has just been moved right off the table. Will this wonderful IDEA ever play out on the High Level bridge?

It has been suggested by the Laura Babcock's Powergroup that Hamilton is, perhaps, on the tipping point of Greatness. Frankly, that seems somewhat doubtful if press-grabbing and innovative ideas evaporate in much the same way they appear, into the ether. 'Ambitious Hamilton', regardless of the all its scintillating promo vids, hashtags and inventive IDEAS, will remain dead in the water if there is no practical 'down-to-earth' follow through by residents and City Council.

So, over to you Hamilton ....
Like the Invest in Hamilton video suggests, "THIS STORY IS FAR FROM OVER".


Consider that the slow but sure development of the Cootes to Escarpment EcoPark System will certainly transform this City in many ways yet imagined. It is an ambitious and progressive forward-thinking long-term plan now established with a formal MOU within a practical time-line. You can learn more about it here . Rather then be dismissive or discouraged by its rather glacial evolution, let's be inspired - and motivated - by the derring-do of a maverick with moxie who leapt into the limelight for a few seconds to test the 'Do We Dare Do It?' parameters.

Mr. Bermingham may not, in the end, actually organize the picnic, but he has certainly launched a GOOD IDEA.  If you do think a picnic on the High Level bridge - in support of the Cootes to Escarpment Ecopark System - is something worth supporting, it's now up to us to make it happen.

To start, you can show your support by 'liking', 'joining' and volunteering with the Cootes to Escarpment Ecopark System on Facebook.  Check back often to that webpage for fundraising initiatives.

It may yet include the ambitious plan to have a Sunset Picnic on the High Level Bridge ...  if we dare.