A wonderful Amazon Review shout-out!
Thank you dear readers!
Plus, a wonderful profile of the title & author - from #Ireland.
THE GILDED BEAVER - Get it HERE.

Writers as Performers: Some thoughts by MLHolton

Over the last few months, as a result of the COVID19 pandemic, everyone is adjusting as best they can through the proliferating portals of #screenculture.

... Some are more adept at adapting than others ...

Many have jumped onto ZOOM, Facetime or similar video platforms to compensate for the current lack of 'LIVE' social interactions. This phenomenon is especially evident on Facebook and Instagram where short clips are shared by nearly everyone - including a larger array of professional and amateur actors.

As a result, some surprising 'old school' performers are experiencing sudden break-away 'social media' success, like former B-List actor, Leslie Jordan, (Instagram @thelesliejordan), who has sky-rocketed to 4.9 million followers (!), with his quaint and amusing 'pillow chats' ... A close second is Sir Patrick Stewart (of former Star Trek fame) who has begun a series of Shakespeare sonnet readings under the hashtag #ASonnetADay on his Instagram feed @sirpatstew.

For those who are introverted by nature or unaccustomed to 'acting' for a living, all this jumping on the 'New Normal' screen-culture bandwagon is a somewhat bewildering twist on Everyday Reality ... I mean, must we all become part of the BORG now?

I, personally, am not comfortable 'performing on-demand' for anyone. Not family, not friends, and certainly not a bunch of unknown strangers from anywhere on the planet ... It's just not the way I want to engage with people, near or far.

Still, during this unprecedented pandemic, 'Necessity has become the Mother of Invention'.

Recently, I was invited to read for the Oakville Public Library's Author Series. The following video was the result...


Sigh. And Arg. ... Let's not kid ourselves. I am not a very comfortable or an inspiring 'performer' ... Why? Because I am a WRITER, not an ACTRESS!!! -  And yet, such is the Nature of the Beast these days. Acting - aka selling - is not just a requirement anymore, it has become a Necessity ...

The following link is from an writer I very much admire, Veronica Cline Barton. Veronica has stepped into this Brave New World by recently launching, with two other women writers, a YouTube book channel, #Bookem, to promote their writing as well as written works by others.

Is dear Veronica a 'good actress'? In truth, I think that depends a great deal on what one might expect from someone not trained in the discipline, (like me!), but who clearly understands the Necessity of self-promotion.

In the following clip, Veronica  offers a very kind and generous shout-out for my 3rd novel, TRILLIUM.  There is a curious moment when she slides from 'performing' to 'thinking aloud' at the conclusion of why I undertook this latest work ... WATCH it HERE.

It's a revealing little tidbit. Because, for all her effervescence, tiaras, bright lights and southern charm, Veronica is clearly a thinking writer who is working very hard to fit in with the never-ending array of Hollywood/YouTube/Facebook/Instagram and TikTok performers. To my mind, it is brave and a courageous undertaking. It is a fearless 'get-it-out-there' endeavour ... And it deserves the greatest respect from this admittedly performance-shy author ... Thank you V!

It's always so gratifying when readers resonate with the efforts that an author makes!

"TRILLIUM is beautifully written ... the story captivates and mesmerizes." She goes on to describe "some characters are endearing, some repulsive - all compelling." She closes with "Holton's imaginative voice and rich verbiage produces vivid imagery in the reader's mind." 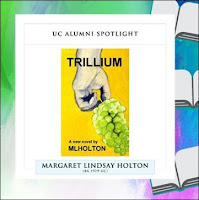 Authors can't ask for much more than that!

University College at the University of Toronto also gave a shout-out in their mid-July e-mailer to Alumni. Identified as an 'Alumni of Influence' beneath the boost of Canadian director, David Cronenberg, I've been tagged as the artist and author of TRILLIUM.

"Pour yourself a glass of wine and enjoy TRILLIUM" that "portrays the intertwined evolution of three families in the Niagara wine-making region." - YES, that's what it does! - Drink up!

Have you added TRILLIUM, a southern Ontario saga to YOUR reading list yet? Available as an ebook or paperback on Amazon  - find your preferred link below - 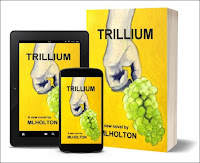 Yup, still here, still at it. And still enamored by this fine and good country that I am fortunate enough to live in. Is #Canada perfect? No, not by a long shot. But, seriously, what is?

And, perhaps more important during these troubled and troubling times, where else in the world is BETTER? China? Russia? The United States? .... What about the Netherlands? Sweden? South Africa? New Zealand? Vietnam? Germany? Turkey? Sudan? Ethiopia? Iran? Pakistan? ...

All in all, Canada is doing pretty well for a youngster on the global stage. That's due, in no small part, to the millions of immigrants who have come from all over the world seeking a BETTER life for themselves and their families ... Kudos to you all!!

It is the DREAM, and the DESIRE to WORK HARD to BUILD a BETTER place that drives us on.
We know we are not perfect, but we do try our best, most often.

Enjoy this wonder-filled day: Enjoy your lives. Live Well -
And thank you Canada and all Canadians for being such Good People.
- mlholton

p.s Still not convinced this is a fantastic country? Consider these statistics: