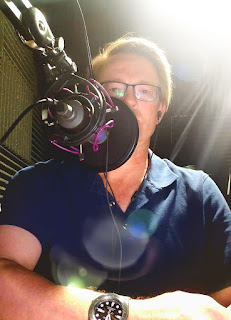 I am thrilled to announce the AUDIOBOOK version of TRILLIUM, narrated by the incomparable Jens Hansen!

In choosing the BEST narrator for this uniquely Canadian story set on the Niagara Peninsula, I was searching for a broad 'Mid-Atlantic' accent  that could reflect the undulating tones and intonations of descendants of varied English-speaking inhabitants of the area - and - I was hoping to find the perfect dulcet tones to appeal to a wide range of global listeners.


Needless to say, Jens has a colourful ‘Anglo’ background ...

Jens Hansen was born in 1964, in Dordrecht, #Holland, to a Dutch mother and #Danish father. At 3 months of age, his family moved to #Nigeria, #WestAfrica, where he was raised on a variety of farms while his father worked for the Ministry of Agriculture. In the late 60's, his family moved to Isfahan, #Iran, where life continued on a new farm. Jens spoke Dutch at home but he was placed in a small school and taught English. His parents would also treat him to English-speaking movies at the nearby US military base. ('The Sound of Music’ and ‘The Jungle Book’ became childhood favourites.)

Iran, for a wide-eyed rural boy, was filled with glorious sights, sounds and smells. Jens explored nearby mountains collecting snake skins, tortoise shells and fossils. He visited nearby villages, drank tea and ate delicious ‘exotic’ meals curled up on the floor mats with locals. He spent many happy hours on the beach with his family on the Persian Gulf. Unfortunately, this idyllic childhood life came to an end when his mother was killed in a car accident.

Jens and his younger sister were sent back to Holland for several months to live with relatives. They soon reunited with their Danish father in #England after he had secured new employment at an agricultural college.


By this point, Jens's English was a bit rusty but he soon got the hang of it again as he continued his education in the beautiful south-western county of #Cornwall - a rugged and deeply rooted Celtic land - famous for knights, smugglers and pirates! His father re-married a Cornish woman who proved instrumental in developing Jens’s further appreciation of the English language. Jens was fascinated by ALL those different British accents! - Aye, shiver my timbers! - His new step-mum also had a great love of theatre and encouraged Jens to join various community groups. After leaving college, he apprenticed in the printing trade, eventually moving to #London, but big city life wasn't for him and he moved to #NorthDevon to be near the ocean again.

His life changed dramatically when he was offered employment in  the paradise islands of #Bermuda. He jumped at it. After settling in his new island home, he readily joined the local dramatic society and even began to appear in newspaper, magazine and tv ads, modelling for local department stores and the Bermuda Department of Tourism. -- (Ha! Mid-Atlantic to the T!!) 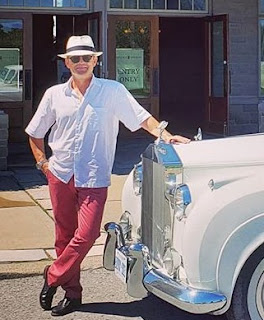 While in Bermuda, Jens met and married his late Canadian wife. During their 11 years there, they were blessed with two fine sons. In late 2001, the Hansen family moved to the #Niagara region of #Ontario, #Canada, and settled into  the small village of #Beamsville. Jens continued to work in print and performed in amateur theatrical productions where his unusual 'Mid Atlantic' accent proved on-point in local historical plays.

Adding to his repertoire, Jens also became a sought-after  wine tour guide in beautiful Niagara-on-the-Lake. (#NOTL). Often seen commandeering a classic Rolls Royce, Land Rover or London black cab around the region in the guise of the famed ‘007’, Jens continues to this day to escort visitors to the region's many local restaurants and nationally-acclaimed wineries.

In 2019, Jens moved with his new partner to the northern end of the mid-sized city of #StCatharines. After nearly two decades in the Niagara area, Jens still loves being surrounded by the sprawling vineyards and century-old fruit orchards so typical of the region. For those who may not know, the famed Niagara peninsula is situated between two of the Great Lakes of North America, #LakeOntario and #LakeErie. The grand Niagara River links the two massive inland freshwater waterways and crescendos at the world-renowned #NiagaraFalls. There, cold waters from Lake Erie plunge over the ancient #NiagaraEscarpment into the gorge below before gushing out to Lake Ontario.

The novel, TRILLIUM, starts here, at this waterfall gorge, when a young, bright-eyed British foot-soldier, Tom Hartford, gazes out over the rainbow-tinged falling water …

After narrating this “epic” 14.5 hour story, Jens says he often thinks of the diverse characters who have come to life in the country-side so eloquently portrayed in TRILLIUM. The colourful agricultural regions of the Niagara peninsula proved fertile ground for the fictitious yet delightful Hartford, hard-working Di Angelo and scheming O’Sullivan clans!

Narrator Jens Hansen is a true raconteur: a lover of language.

Without question, Jens has brought his masterful story-telling skills to the diverse multi-cast of TRILLIUM. Today, Jens says he's honoured to narrate this timely tale. He hopes to enthrall you all as he takes you on an unforgettable journey through lush local Canadian history …

Now on AUDIBLE for all to enjoy!
(also available on Amazon)
and now, effective Dec 17th, on  iTunes

Follow the well-travelled voice of JENS HANSEN  - - DIVE IN! And, ENJOY!!!
TRILLIUM via author, Margaret Lindsay Holton (Also available in Ebook or Paperback)

p.s If new to audiobooks, try Audible for free for 30 days using this link. Listen to this spell-binding tale whilst knitting, wood-working, house-cleaning, exercising or just soaking up some golden rays ... Tune in! Your first download is FREE!
iTUNES link