The Canadian art world is all a-twitter at the moment with the recent 'price-breaking' sale of this iconic work by Canadian 'Group of 7' founder, Lawren Harris. As the CBC writes, "Mountain Forms, a renowned 1926 painting of Alberta's Mount Ishbel in the Sawback Range of the Rocky Mountains in Banff National Park, sold for $9.5 million at the Heffel Fine Art Auction House in Toronto Wednesday night. Including the 18 per cent buyer's premium, which comes out of the winning bidder's pocket and goes to the auction house, the total price was $11.21 million." A record-breaker.

'Vintage' Canadian painted art is experiencing a bit of an up-tick. Steve Martin, famed comedian, is not only a collector, but a promoter of Lawren Harris's works. He curated a special show of the artist's pieces at the Art Gallery of Ontario in the fall.  Harris has also been the object of several memorable biographies, most noteworthy, Joan Murray's incisive pictorial bio.

As a practicing artist, long interested & influenced in the Harris's painting subjects and techniques, I am thrilled that the man is receiving the greater international attention his work truly deserves.

One regret is that I know I will never OWN a Harris. His works are very much out of my price league now. However, I take some comfort that I do have a few 'Harris' of my own ...

You see, I began, some years ago, to embark on a series of 'Paint Poems' (by me) that honor the man, his techniques & his aesthetic sensibilities. I was never trying to slavishly 'copy' him, rather, I 'followed' him, in order to learn more about his sense of composition and how he captured light. The 'sizes', per se, didn't matter to me. It was his colour sense, what he SAW in landscapes,how the works moved me, that, in turn, inspired me.

I KNOW I got very close to his SENSES as a result.
A few of my 'Paint Poems to Lawren Harris' follow.
I love them. I hope you will too. :)

The 11th Annual Hamilton Film Festival opened this weekend with an open house at Digital Canaries Studio, with the launch of the 72 Hour Film Challenge: where teams get 72 hours to make a 7 min film. They have the run of the studio, (2pm until mid-night), will receive novel props, and have the option of SFX make-up, if they want it. Next weekend, on Saturday, at the Zoetic Cinema, (on the Hamilton mountain), the results will be shown. Awards will be presented by Academy Award winner, Colin Chivers. 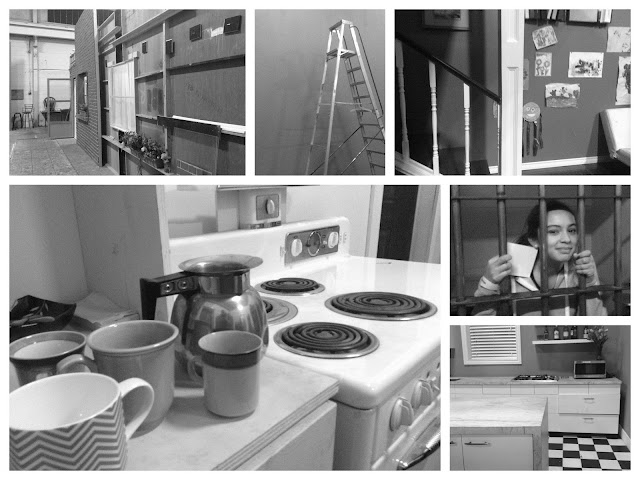 Come NEXT WEEKEND to the Zoetic Cinema Theatre, (on the mountain), to see how the teams did under intense time, set and prop restraints. Saturday, 7pm  - WILL BE A HOOT!
And, COME ON OUT to the Hamilton Film Festival, running all this week. Nathan Fleet & his team have pulled out all the stops to make this a memorable, exciting, thought-provoking & funny - (gore galore!) - event.

Schedule, listing & prices can be found on the Hamilton Film Festival WEBSITE.