Now listed on AllAuthor.com - Link on image to go there.

Otherwise, just let me know. A (Trillium) or B (The Gilded Beaver, 2nd Edition)?

Look for province-wide events, self-guided tours, a
and interactive videos on the main page via the link above.

'Who are we? Where have we come from?

When an international wine #influencer on Instagram, with a following of over 10K, gives a super 5-star rating for your novel, expect a swift reaction from her attentive audience. Within one week, Renee Sferrazza's positive post about TRILLIUM  has 600 likes with over 125 comments and commitments to purchase, voiced by #winelovers from all around the globe! - Now, that's social impact!!

Her rating is also a tremendous boost for the real life setting of the novel, the  #winemaking region of the #Niagara peninsula, sandwiched, as it is , between the southern shore of #LakeOntario, #LakeErie and the grand meandering Niagara River, (yes, the location of famed #NiagaraFalls.)

THANK YOU RENEE!! - @wine.by.renee - and to all the other great gals affiliated with Instagram @sips.aroundtheglobe & @wineandbubblelover. I am most humbled, grateful and honoured that you found TRILLIUM "captivating"!

Equally, when a more traditional #bookreviewer at Booklytical criticizes, in detail, the failings of the novel from their perspective, and then goes on to give the work an 8 out of 10 rating, that's really not too shabby either. Certainly, the criticism hurts, but the overall book rave as - "a stand-out gem"-  does compensate. With that rating, I know that the story did work its magic ... eventually!
....

Book reviews really are the circulating life-blood of an author's efforts. It tells #writers what does and does not resonate. It tells us where work may be needed, and where too one excels at the craft. It has been mentioned, as example, a couple of times now, how my capacity to generate imagery is "like a painter." As a highly visual person who believes that the use of colour, form, and design intimately expresses our current humanity, this comment is always very welcome. I know my imagination has successfully grafted onto the reader's imagination. 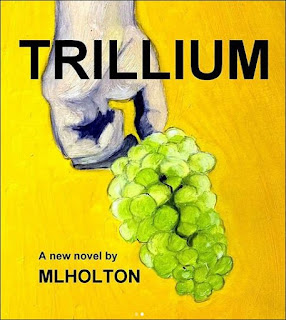 I have also heard that some readers long to know more about one of the central characters, Anna Di Angelo.

Dear Anna IS an integral part of the evolving story. In fact, the story wouldn't have its name or have even come to fruition without her experimental childhood mucking about.

In response, I have just finished an interview with a very engaging website, The Protagonist Speaks, where I've given more rein to Anna's thoughts and motivations. That's releasing October 24th.

It was a difficult task to exude her personality in written form because Anna, as an illiterate character in the novel, neither reads nor writes.

Yet, to my mind, she is the epitome of a free spirit. Her thoughts, I believe, ought to exhibit the same kind of tendency. She goes where the wind blows. She responds to what the wind is doing. She reacts, she responds, she interacts. She dips, she dives, she swirls. She is a child of the Earth. She also has this uncanny ability to observe Nature in a unfiltered and unbiased state. As a result, Anna has an incredible knack for growing things. There will be more from her at the end of October ...


In the meantime, please do pick up & enjoy
the "epic!" & "gorgeous!" TRILLIUM
as either an ebook or paperback.