The 'mall' is a buzzing beehive filled with magnificent & mundane bounty ...
Well worth a visit to Freelton, Ontario. The adjacent 'Thai' cafe is e-e-eccentric too!
Check out my latest review (with a walk-about video) in Raise the Hammer.
No comments:
Labels: Freelton, video 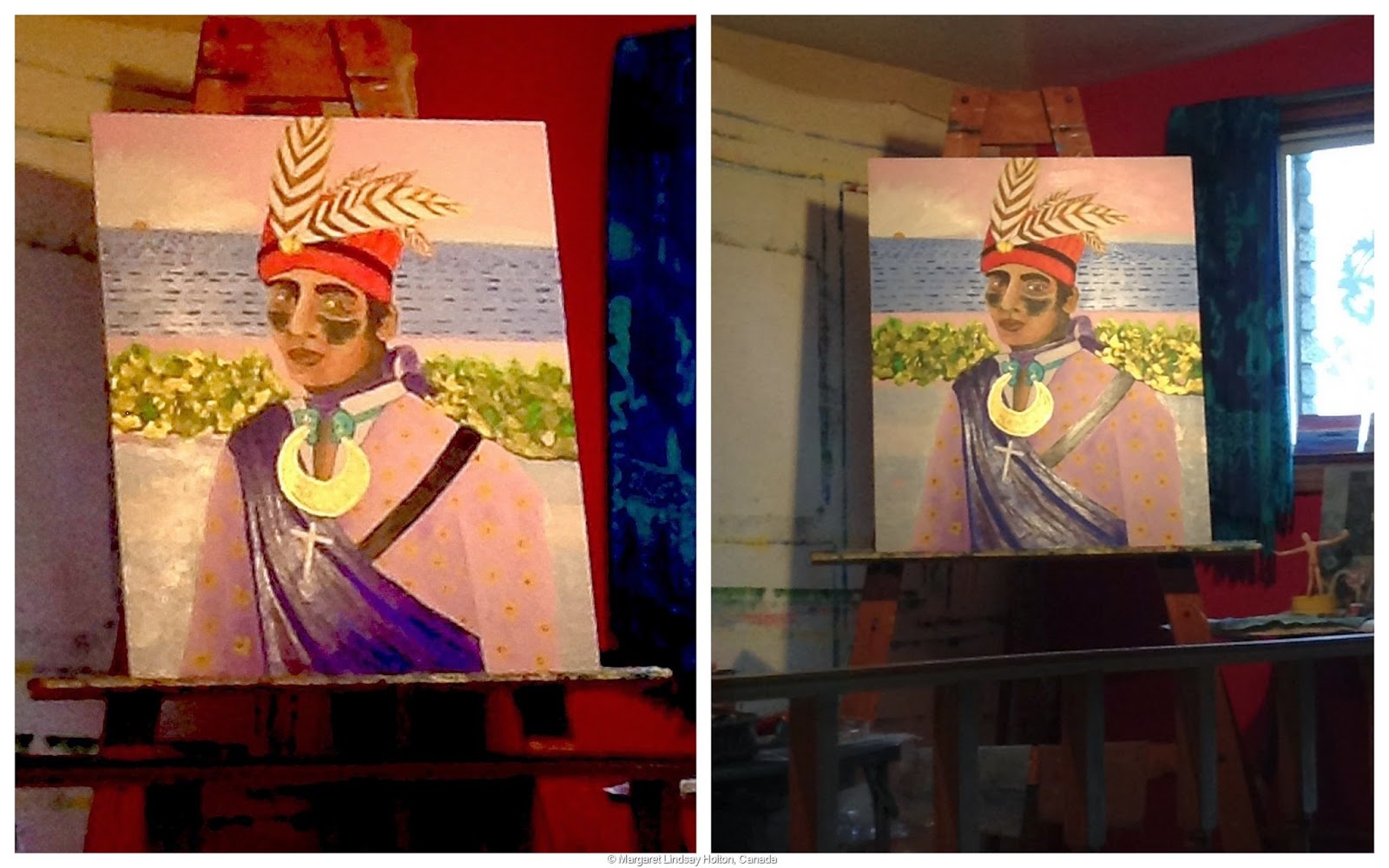 I have, for some time, been interested in the life and times of Chief Joseph Brant. He was, without question, a colourful and controversial figure caught up in the crush of the cultural evolution that swept over the North American continent during the end of the 18th century.

My portrait of him is an imaginative interpretation of him as a young man, based on prior 'formal' and 'informal'  euro-portraits done of him later in life. (Note: He lived long before photography, as a documentary device, emerged.) All we have today are other artistic interpretations of him. Mostly he was painted as an emissary for his people, though, in fact, he had little hereditary stature within the then small Mohawk nation. The 'Chief' designation came as a 'war' appellation, later in life.

Who was Chief Joseph Brant?*

Chief Joseph Brant (b.1743-d.1807) - aka Thayendanegea ("he who places two bets") - was a prominent Mohawk politician and warrior during the American and British Revolution in North America.

Joseph became a 'Brant' when his mother (of the matri-lineal Mohawk Wolf Clan) married for a second time to Brant, a well known Mohawk leader. "Her new husband's family had deep ties with the British; his grandfather was one of the Four Mohawk Kings to visit England in 1710." (Wikipedia) Joseph's half-sister, Molly, soon established a common-law relationship with Sir William Johnson, the influential and wealthy British Superintendent for Northern Indian Affairs. Sir William was fluent in the language of Mohawk and was greatly involved with the development of 'British-Indian' relations over the course of his lifetime. Joseph moved in with them at Johnson Hall, and William soon took on the responsibility of educating Joseph to, what would become, the 'New World'.

It is interesting to note, that, by the time of his death, Johnson was one of the largest landowners in British America, (170,000 acres), and one of it's largest Northern slave owners (60 Afro-Americans and numerous indentured Irish families worked his lands and mills.)

Sir William Johnson was also a strong supporter of the British Anglican Church to counter the influence of French Catholic missionaries in western New York. By so doing, he consolidated both Iroquois and British territorial and growing commercial interests against the rival Algonquin and invested French interests.

In 1769 Sir William Johnson paid for the construction of an Anglican church for the Mohawk on land donated by Molly Brant. He is known to have had 8 children with her, as well as numerous other children by other women. (Not particularly 'uncommon behaviour' for that era.)

Joseph watched this powerful man of influence and learned how to 'operate'  ...

Starting around age 18, Brant took part with Mohawk and other Iroquois allies in a number of British actions against the French in what is now upper New York state and Canada.

In the spring of 1772, at 29 years of age, Brant went to Fort Hunterto stay with the Reverend John Stuart. He became Stuart's interpreter and teacher of Mohawk, collaborating with him to translate the Anglican catechism and the Gospel of Mark into the Mohawk language. Brant was, seemingly, a devout Anglican.

He married three times: Peggy, who died of tuberculosis, (and had two sons, including Isaac who he later killed, in 'self defense'), Suzanna (died in 1777, with no issue) and Catherine Adonwentishon Croghan, who he married in the winter of 1780. She was the daughter of Catharine (Tekarihoga), a Mohawk, and George Croghan, a prominent Irish colonist and British Indian agent, deputy to Sir William Johnson. She and Joseph had seven children.

On November 11, 1775, Guy Johnson (nephew of Sir William) took Brant, aged 32, with him to London to solicit more support from the British government. Brant hoped to persuade the Crown to address past Mohawk land grievances in exchange for their participation as allies in the impending revolutionary war. The British government promised the Iroquois people land in Quebec if the combined Iroquois nations would fight on the British side in what was shaping up as open rebellion by the American colonists. In London, Brant was treated as a celebrity and was interviewed for publication by James Boswell.  His portrait was painted (twice) by famed portrait painter, George Romney, and later, by other notable portrait artists. He was received by King George III at St. James' Palace. Life was good.

Meanwhile, the existing council of the Six Nations had previously decided on a policy of neutrality between the warring North American euro-factions. They considered Brant a minor war chief and his Mohawk clan a relatively weak people. Frustrated, Brant recruited insurgents who would become known as 'Brant's Volunteers'. In essence, these fighters were a mixed band of marauders who raided frontier communities, stealing cattle, livestock & crops, and burned homesteads, killing many 'enemies' ...

In July 1777 the Six Nations council decided to abandon neutrality and entered the war on the British side. Brant soon acquired a reputation as 'Monster Brant' for his lack of restraint in military actions. That nickname was built, it seems, on unsubstantiated rumor, but stuck. During his assorted military escapades, he was wounded twice, once in the ankle, and once in the leg.

In May, 1779, Brant returned to Fort Niagara where, with his new British salary and plunder from his raids, he acquired a farm on the Niagara River, six miles from the fort. To work the farm and to serve the household, he used slaves captured during his raids. Brant also bought two slave girls, a seven-year-old African-American girl named Sophia Burthen Pooley & her sister. They served him and his family for many years before he sold Sophia to an Englishman in Ancaster for $100. (It appears that Sophia and his wife, Catherine, didn't get along that well ...)

He, like Sir William Johnson before him, built a small Anglican chapel for the Indians who lived nearby.

With the Treaty of Paris (1783), both Britain and the United States ended their conflict. Both countries studiously ignored any prior land sovereignty issue with the Indians.  Brant was disgusted by this betrayal and became instrumental in the establishment of the Western Confederacy (of 15 tribes), that attempted to regain sovereign control of former native lands. The long and the short of it, they did not succeed.

Brant, however, was 'honoured' in 1784 by then Upper Canadian Governor, Haldimand, with a pension and a proclaimed land grant for a Mohawk reserve on the Grand River in present day Ontario. Later that year, the clan matrons decided that the Six Nations should divide, with half going to the Haldimand grant and the other half staying in upstate New York.

With his secured funds, Joseph built a new house in Brant's Town which was described as "a handsome two story house, built after the manner of the white people." Therein, he managed 20 white and black servants and slaves. (Brant believed Anglo Governments made too much over the keeping of slaves.  Captives of war were long used as servants in Indian practice.) He developed a good farm of mixed crops and also kept cattle, sheep, and hogs.

In 1792, the American government invited Brant to Philadelphia, then capital of the United States, where he met President George Washington and his cabinet. The Americans offered him a large pension, and tried to lure back the Mohawks, with a reservation in upstate New York.

In early 1797, Brant traveled again to Philadelphia to assured the Americans that he "would never again take up the tomahawk against the United States." Brant actually offered his band of 'volunteers' to the French to  "overturn the British government in the province."  ...

He eventually secured 3,500 acres from the Mississauga Indians at the head of Burlington Bay. (By then, Upper Canada's Lieutenant Governor, John Graves Simcoe, would not allow land sales between Indians, so he bought this tract of land from the Mississauga and gave it to Brant.) Around 1802, Brant moved there and built a mansion that was intended to be a half-scale version of Johnson Hall. He is known to have had a prosperous farm, in the colonial style, with a 100 acres of crops.

Joseph Brant died in this house at the head of Lake Ontario (site of what would become the city of Burlington, Ontario) on November 24, 1807 at age 64 after a short illness.

His last words, reputedly spoken to his adopted nephew, John Norton, reflect his lifelong commitment to his people: "Have pity on the poor Indians. If you have any influence with the great, endeavour to use it for their good."  In 1850, his remains were carried 34 miles in relays on the shoulders of young men of the Grand River Indian Reserve to a tomb at Her Majesty's Chapel of the Mohawks in Brantford, Ontario.

In summation, Brant clearly acted as a wily negotiator for the Six Nations. He used British fears of his dealings with the Americans & the French to extract concessions, and to self-profit. His conflicts with British administrators in Canada regarding tribal land claims were later exacerbated by his renewed relations with American leaders. Yet, even so, the Brits allowed him to settle handsomely in Upper Canada, off reserve.

Brant was a war chief, not a hereditary Mohawk chief or sachem. His decisions could and were at times overruled by the assembled sachems and clan matrons. However, his natural ability, his early education, and, the connections he was able to form, made him one of the most influential Indian leaders of his time.


His lifelong mission was to help the Indian survive the transition from one culture to another, transcending the political, social and economic challenges of one of the most volatile, dynamic periods of North American history.

* Facts extracted from Archives of Canada and  Wikipedia

NB: There are ample on-line resources to further expand your knowledge of this intriguing man ... 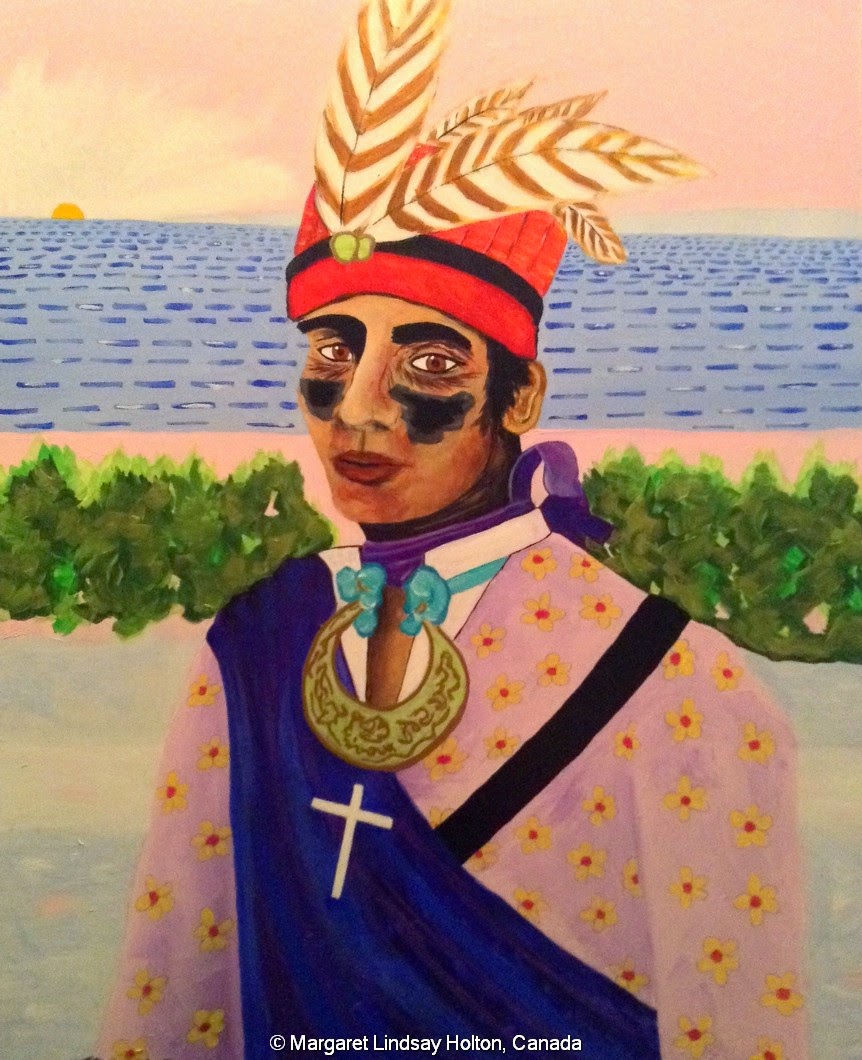 In other news ... and a curious bit of timing ...
The City of Burlington unveils a new heritage plaque this week ... 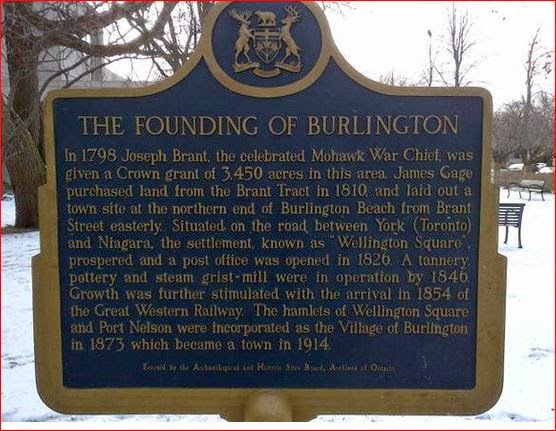 For an interesting general history about Burlington, go here> http://www.eureka4you.com/burlington/history-history.htm
There's an curious piece of trivia on that site about the living tree that Brant used as a marker to walk off the boundaries of his land grant.