Cultural Appropriation, Appreciation or Something Else?

On Oct 23rd, the Ontario Arts Council released this video ...

Both posit - and then take positions - on 'Cultural Appropriation', defined by the OAC website as "the intentional or unintentional use of a people's culture or cultural expression, traditional knowledge, intellectual property or artifacts".

Meanwhile, numerous First Nation representatives and sympathizers have gathered over the past few months for what is unquestionably the largest peaceful 'protest' against 'Settler' law & enforcement in North America today. The protest raises many unsettled issues, but primarily, the desire is to protect the waters of the Missouri river from an inevitable pipeline spill.

Fundamentally, this stand by indigenous peoples, and by those who support them, pits Earth 'citizens' against corporate 'profits'. The protest is a vivid manifestation of - and DEMAND for - the 'transition' from fossil fuels to sustainable development.

It is TIME. As the hashtag so succinctly states, #WaterIsLife .

As descendant of 'Settlers' who have been in North America since the early 1700's, I recognize my familial history, but, to be crystal clear, I am not 'guilty' of 'white privilege' just because of that association. I emerged on the planet where I did, when I did, that's just the fact.

When I was a child, raised on a farm in Southern Ontario, during the 1950's, there were moments when I could not find the right words for strong appreciative feelings for the forces of Nature ... The only 'source' were vaguely distilled and often invented 'native teachings'. A certain affinity developed for 'the native way'. Yet, as a child, I did not resonant with 'Turtle Island' anymore then I resonated with certain mythical stories from 'the Bible'.

Finding Life's Essence ~ that resonated with my Truth ~ manifest in my first 'formal' painting, painted when I was fourteen.

It is a stylized and imaginative graphic of an 'Eskimo' (as the Inuit were 'known' back then) killing a seal, with a spear, on an ice floe. It was vivid, brutal and honest. It was not appropriation; rather, it was a 14 year old's 'statement'' recognizing the vital life-giving relationship that flows from humanity - to and from - Nature.

Entitled 'The Kill', it stands today as my first 'formal' painting.

I had never been to the far North of this continent, but again, certain myths, stories, images and realities from that area resonated with the development of my own sense of Self.

This occurred in much the same way that, later, I resonated with imagery, myths and religious philosophies from other parts of the world, like Buddhism and/or Fauvism.

Does my re-interpretation of these IDEAS through my own developmental prism make me a 'cultural thief'?  I do not think, or believe, so. We ALL 'borrow'. We ALL 'trade'. We ALL seek the means to express our singularity within the commonality of humanity.

Today, broadly speaking, we all KNOW that 'nationalism', per se, is a 'construct'.

The larger IMAGE that I HOLD is of us, as humanity, (as one species of many), flying through space on a twirling life-sustaining globe in a seemingly infinite multi-universe.

To my mind, Creators, plural, exist. Often, I ascribe attributes to these assorted 'gods': they may be male, female, animal, mineral, fish, fowl, mana, Life Force, and/or just 'the Juice'. The adjectives and pronouns vary, but the deep faith and understanding remains.

We are a part of something Greater, and the planet is our Home.

It is thus heartening for me to now see the similarities in the indigenous Thunderbird image used in the current Standing Rock stand-off, in conjunction with a painting I did in 1991, called 'The Protector'. Both resonant because both express Truth. The similarity is not indicative of 'cultural appropriation', or even cultural appreciation, it is a personal visual creation that RESONANTS with our mutual relationship to the planet.

No ONE group or individual 'owns' this relationship or connection to the planet.


So, in response to the rabid and increasingly racial 'Nation-alists', who are springing up from all quarters, know that I stand with - and against - all of you.

Why? Because I have already solemnly sworn allegiance to my own mythical nation of 'Canadada'.

I be 'canajun' in Canadada.

All the boundaries and borders are within my own mind. And as such, I am both the perpetual 'victim' AND 'victor' ...

... It works perfectly well for me.

p.s. And now, TVO jumps in, flaming the issue, in part. - Watch, listen and LEARN...
http://tvo.org/video/programs/the-agenda-with-steve-paikin/the-trouble-with-cultural-appropriation

...UPDATE: May, 2017 - And here's one that INFLAMES the 'boundary' IDEA again ... We're never going to get past this if there isn't a NEW kind of thinking all round ... https://m.youtube.com/watch?v=XqBXDPzyLm0&feature=share

We are in a profound 'transitional' period that will, (if we last that long), be the hallmark of our generation. Were we able to wean ourselves off our dependence on fossil fuels? Did we rise up against the powerful global businesses, banks and puppet governments that promote & subsidize them? OR, did we succumb? Were we overwhelmed? Were we, in the end, sent into war to fight for their legally protected stock-market vested interests? - ?!? - Did we ALLOW these on-going Rapers of the Earth to continue with their thoughtless defilement of our collective HOME?

Did we STAND UP - finally - for MOTHER EARTH?

This painting came from a very powerful and vivid dream. Today, I stand in unison with the indigenous people of the planet, the 'canaries in the coal mine', who have - for decades - warned us of our off-kilter and unhealthy relationship with the Creators'  life-sustaining planet.

EVERY Act we make TODAY determines our collective FUTURE - as just one species of many.
EVERY DAY we can choose to consciously live in harmony with the planet - or not. 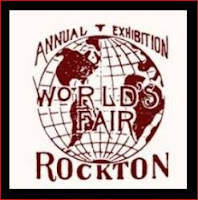 From hamsters to horses, with 'live' judging of well-bred livestock and multiple food competitions (the 'biggest' pumpkin, best pies & pickled preservatives etc.), good-spirited competitive sportsmanship permeates the entire event. The local 4H farming community is heavily involved. Drawing from all around the area, youngsters & oldsters alike, get in on the act.

Indoors, through the fair buildings, various displays of antiques, quilts, and unique clothing by the long-standing Woman's Institute entice with their superior skills, radiating with the common-sense of solid home-keeping.

There are also various levels of art & photography displays, ranging from children's concepts to adult executions. I am thrilled to have one of my paintings included in the 'Country Scene' Art Section of the Rockton World's Fair this year. The painting below effectively evokes the stillness of Dusk: when the skies are still & the wind drops down to a whisper, in the slow boat ride home ...

Come on Out with the Family! Wander the grounds, experience the sights & sounds of a proper country fall fair. (You may even be tempted grab a mustard-relish-smeared foot-long hot dog ...)

Admission prices, map & other vital info are listed below. Best to just pop over to their website for any other particulars.  Hope to see you there!


(I hope to be in attendance on Saturday for 4-5 hours, mid-day to dusk, weather permitting.)

Come On Over!!
The Rockton World's Fair LINK.

People are always fascinated by my pinhole cameras, and interested to learn about the history and basics of pinhole photography. But sometimes, something else completely catches their eye ... It's always gratifying when a new patron SEES something that I've done from a few years ago, likes it, and then, buys it.

Done in 2012, the above image (30x22.5") is from my 40+ WHITE OUT series. Some prints from that series are now available in an assortment of print sizes (with or without frames as per your preference) via my Fine Art America 'retail' LINK.