It has been my desire for quite some time to DO A MAP that would somehow convey 250 years of evolution on the Niagara peninsula where my third novel TRILLIUM is set - while, at the same time, convincingly convey the fictional aspects of the story about three diverse families who are inescapably intertwined over land, lust and loot ... It was a nagging writerly-type problem ....

I searched and searched for the Right Person able to undertake this demanding commission, then stumbled, quite fortuitously, on Dutch artist, Chaim Holtjer.

I was first introduced to Chaim Holtjer's 's inventive work via Twitter. He followed me at @TrillLINDSAY and I followed him back ...

I started to look around his posts and thought "YES .... great fantasy - yet grounded in a believable realism."

We soon connected via FIVERR, and the rest, as they say, is history. Literally.

The fantasy of #HistoricalFiction ... Chaim started with my word premise of what I wanted and needed. (I supplied about 200 words of same, and attached a Google map of the area.)  He responded with a rough sketch that incorporated the basic points as I'd requested.  I responded with a 'mark-up' on that sketch. And then, left him to it ... It took him 2 weeks from start to finish. 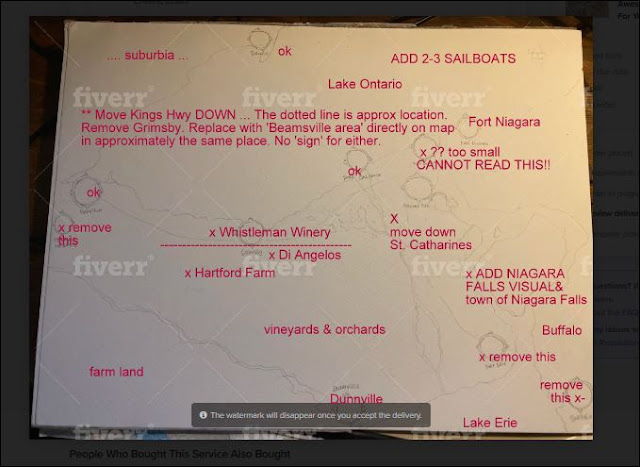 Granted, Chaim is not the best calligraphic artist I've ever known ...
But he does SUPER EXCEL  in interpreting landscape, real & imagined. And the price is right.

His FINAL map - uploaded into the paperback and ebook editions of TRILLIUM today - is a wonderful compliment to the story! It will most certainly assist new readers to place those three dynamic fictional families into the ever-evolving region of #Niagara ...


P.S. If any past readers of TRILLIUM would like a copy of the map, let me know!
No comments:
Labels: #TRILLIUM - NOVEL, #writing, thoughts on writing
Newer Posts Older Posts Home
Subscribe to: Posts (Atom)