Art Gallery of Hamilton: 'Made in Canada' Gala 2017 - UPDATE 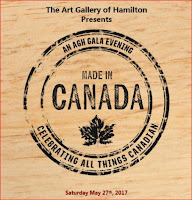 Always fun to find out - after the fact - that one of my works has been included in a Fund-Raising Gala Auction!

The Art Gallery of Hamilton recently hosted a 'MADE IN CANADA' Gala. Apparently, a pinhole photograph of mine that I donated several years ago was 'in'.

Unhappily, the event on May 27th came and went, with me none the wiser ... Still, here are the seeming highlights > 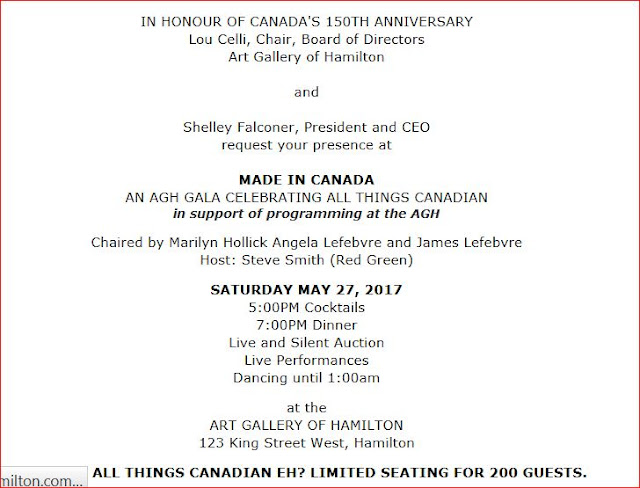 ...  Maybe one day I'll find out who actually bought my donated work, and for how much ...
Artists' do like to know what happens to their generously donated 'freebies' ... HA!

So thrilled to be a part of this amazing choral event in British Colombia.
Canadian composer Tobin Stokes has imaginatively re-interpreted my poem, 'Bush Chord',
to create an astounding musical medley of 'sun-struck lyres' ... 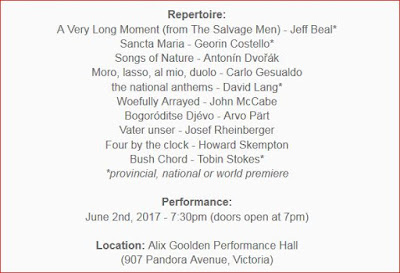 My poem, Bush Chord, on which new choral work, by Tobin, is based -

these wonder instruments pressure whistle
chattering, cheering, cackling
crackling within a hesitant cyclone of light
flickering flames
of sublime delight, warming slow, they give us life

to this instant, brilliant burn
an intense unrehearsed liquid fire
a sound symphony of sun struck lyres
complete and sacred
a rare but common gift

to get to this
this calm clear moment
listen

listen
to these bush chords
please

Ok, call me corny, but I love how these look. White with 'ribbon' red thorough out. Planted last fall, and gratifying to see them come up healthy and hardy this spring ... 'Canada', as a nation state (only 150 years young), may have a ways to go yet - but with Good Will, GOOD things remain possible ...
No comments:
Labels: © Margaret Lindsay Holton / canadadaPHOTOGRAPHY, Canada 150 Tulips, digital photography

Wow. Very humbled and honoured to receive
The K.W. Irmisch 'Arts Person of the Year' award - and trophy!
Awards  celebration was held at the Royal Botanical Gardens on May 11th, 2017,
hosted and organized by the City of Burlington.

When I was notified that I was 'in the running', and knowing too that I would not be able to attend that night, I prepared a little 'speech' ... just in case .... because you never know ....
I was asked to have a 'stand in', and asked local arts champion, Kim Varrell, to act on my behalf.
Little did we both know that I would WIN!!!

"I am very sorry I could not be with you all tonight. I am humbled and truly honored by this award, especially as everyone else in this category is so deserving.

I grew up in the rural North-end of the City on a sheep farm, up on top of the Escarpment, far from the lakeside downtown core. .... As a child, Burlington, as a City, was miles away! - Our family roots are deep in this area: first, as pre-Confederation farmers, then, post-Confederation, as Loyalist manufacturers, who fanned out, building and contributing, to the well-being of this region. Today, I stand as the sole professional artist from a large extended family that is now spread across much of Southern Ontario. - We are Canadians.

I do consider it my role - and responsibility - as a mature artist - to be a cultural witness of our Times - to interpret the issues of our day - through my pencil, pen and paint brush. Photography and film-making are newer additions to my work, but, fundamentally, my work is what I DO - as a multi-disciplined Canadian artist - rooted to this land - HERE - on this amazing planet.

Burlington, as a City, is now a rapidly evolving collection of diverse neighbourhoods. We are perched between one of the greatest of Lakes in North America, Lake Ontario, and the ancient primordial rock of the Niagara Escarpment. Our little patch of turf stands as a beacon of civility and safety in a larger war-torn and increasingly troubled world. To my mind, we all have a responsibility to maintain that civility through our words and neighbourly deeds. It is how we create "community" amongst ourselves.

Art, in whatever form, is a neuron bridge. It shares IDEAS. Some may be critical and unsettling, Others can be super positive and celebratory. All together, art expresses WHO we are to each other. Art makes us human.

I am very happy to receive this honour.  Thank you."

Burlington’s Best Awards are managed by a citizen’s committee that was established in 1965 with the mandate of recognizing local residents who bring honour to the city and make a significant difference in the community.

p.s. Highlighted in the nomination video was one of my more recent art projects, The Frozen Goose (about a rural family coping in the aftermath of WW1.). It is the ONLY Canadian film, as far as I know, that includes two outstanding local locations in Burlington, Ontario, Canada - Mount Nemo & Rattlesnake Point. Both are timeless landscapes. See it here.


Watch the #BurlBestAwards on @cogeco: Sunday, May 21 at 9pm

Plus a few shots of the event, courtesy of the City of Burlington - 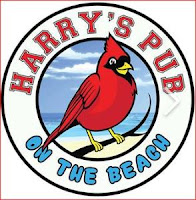