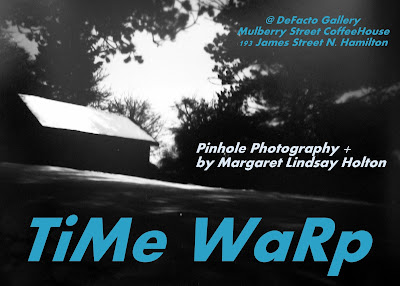 Please join me, in the evening, 7-8pm, during Hamilton's April Art Crawl - Friday, April 14th.
Exhibit will be up starting from April 11th & runs until May 7th. 4pm.
A selection of pinhole photography, (with one large photo-collage thrown in ... ) 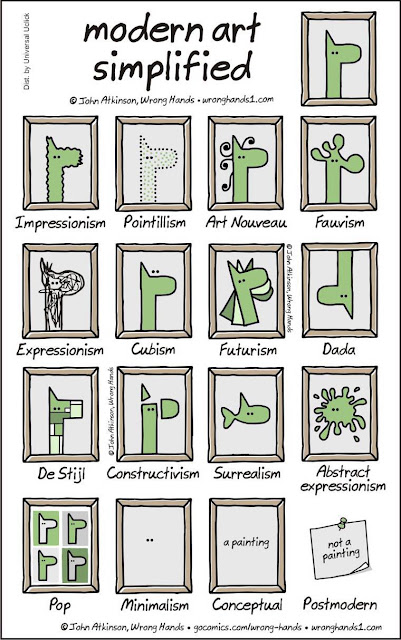 .... Well, that's kind of nice. I have been nominated for the City of Burlington's 2016 'Arts Person of the Year' award.

(Burlington is situated on the western end of Lake Ontario, one of the Great Lakes, nestled in the Province of Ontario, in the amazing country of Canada.)

I don't stand a chance - there's such other great talent on deck. Still, it is very flattering to be considered.

Equally as flattering is to be listed as a 'Famous Person' from Burlington.

In the main, an artist's life, no matter where they are situated, is one of DOING. The rest - payment, recognition, accolades - is pure gravy. I have been at it for quite some time now, so again, it IS gratifying to finally be 'seen' by the larger non-arts community.

Next up for me is a pinhole photography show in the Defacto Gallery, at the Mulberry Street Coffee House in Hamilton. It's going up April 10th and will be there until May 7th. Entitled: TIME WARP , I'll be posting more on that shortly ...

Up UP and AWAY!
p.s. They are missing an art type in the above chart  -
'naive-surreal-folk-abstractionism-by-canajun-M.L.Holton'  - wink, wink.
ps. Woohoo - I WON! :)
More here
No comments:
Labels: © Margaret Lindsay Holton / canadadaPHOTOGRAPHY, acrylic painting, Art Person of the Year Award, Famous Burlingtonian 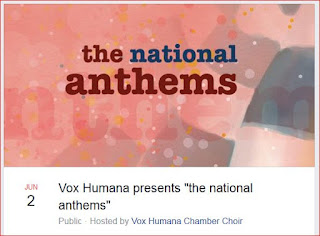 Excited to announce the official premiere of the new choral work based on one of my poems, 'Bush Chord', by Canadian composer, Tobin Stokes, commissioned by Vox Humana Chamber Choir, from British Columbia, Canada.

What was the inspiration behind "the national anthems?"

"Every country has a history – how it came to be, how its wars were won or lost, how strong its people are, or how proud, or how sad. We group ourselves into nations, but it has never really been clear to me what that means, or what we get out of it. Are we grouped together because we believe something together and are proud of associating with others who believe the same way?

Or are we grouped together because our ancestors found themselves pushed onto a piece of land by people who didn’t want them on theirs? It seems that all nations have some bright periods and some dark periods in their past.

Building a national myth out of our bright memories probably creates a different character than if we build one out of the dark.


I had the idea that if I looked carefully at every national anthem I might be able to identify something that everyone in the world could agree on. If I could take just one hopeful sentence from the national anthem of every nation in the world I might be able to make a kind of meta-anthem of the things that we all share. I started combing through the anthems, pulling out from each the sentence that seemed to me the most committed. What I found, to my shock and surprise, was that within almost every anthem is a bloody, war-like, tragic core, in which we cover up our deep fears of losing our freedoms with waves of aggression and bravado.

At first I didn’t know what to do with this text. I didn’t want to make a piece that was aggressive, or angry, or ironic. Instead, I read and re-read the meta-anthem I had made until another thought became clear to me.

Hiding in every national anthem is the recognition that we are insecure about our freedoms, that freedom is fragile, and delicate, and easy to lose. Maybe an anthem is a memory informing a kind of prayer, a heartfelt plea: 'There was a time when we were forced to live in chains. Please don’t make us live in chains again.' " - David Lang.

to get to this
this calm clear moment
listen

listen
to these bush chords
please
Have seen the preliminary score, but cant wait to HEAR it!
If in British Columbia in June, please do drop in for a unique choral experience!

p.s. NICE to be included in such august company!
...  Margaret Atwood opera, another project by Stokes from three years ago  ... :) 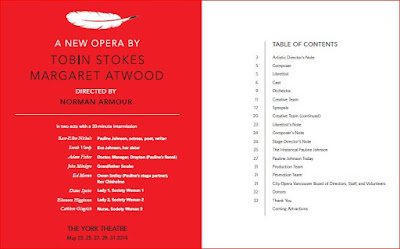 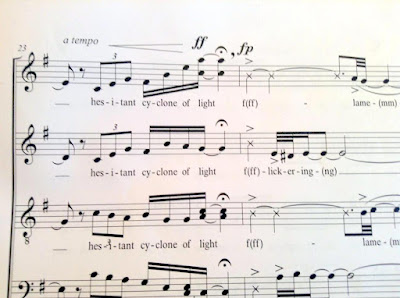 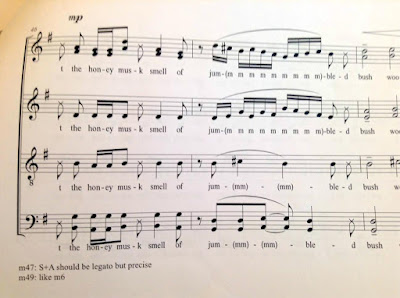 UPDATE:  Complete sidebar, but of interest to some, perhaps: The National Parks Service of the United States of America used this poem, BUSH CHORD, in an educational park guide, without authorization by me. After I notified them of this 'copyright issue', they said they wouldn't use it anymore ... Kindly note, there was NO chit-chat about financial compensation for prior use  ... (ha! at least my NAME was on the poem! ) ... and it REMAINS on the internet Forever ...  For anyone who CARES, this is 100% WHY talented 'artists starve'. People STEAL/"borrow" other people's work for their own USE and GAIN.  Call it for what it is - THEFT and it's 100% WRONG -  See: 'Life in an Ecosystem' NPS/Gov, PAGE 28 .

... Exploration & experimentation are main-stays of what I do as an artist  ...  Trying new things, especially when painting, means exploring new tools and the unknown to investigate a medley of thoughts and feelings. This particular effort is a bit crude, but, to my eye, it has huge potential. ... Starting with a ruby red undercoat, then applying a layer of metallic paint, then dabbing on coloured dots with the back-end of a paintbrush to outline a suggestive bird-in-flight, then letting strong LIGHT play all over the surface, well, wow, YES, I am liking it. Cumulatively, it creates for me a compelling & evocative untold story: one of quiet power, strength, ephemera, that whispers of Time, both ancient & modern. - All of it inspires me to reach higher, pursue farther, get further ... enjoy. 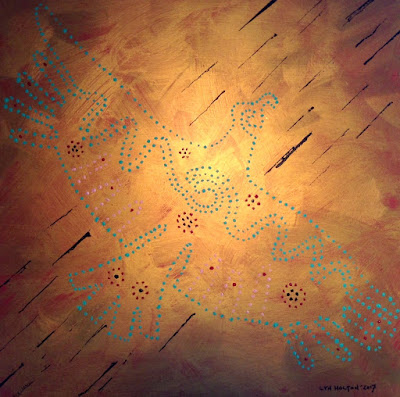 ... the weather is erratic these days, to be sure, BUT there is solid warmth in that Sun now, even if the temperature is still hovering below freezing ... Courage Comrades! It's a comin'!!!
UPDATE, April 2nd: Amazing what difference 10 days can make ... It's LOVELY out now. But there is still a whiff of winter weather in the air ... In the meantime, ENJOYing this SUN!

*The temptation with this final shot was to 'blow it out' as much as possible to force a high-contrast with the stark shadows. I've done some of that here, but I think it could be cranked up a bit more ...and might, in the end, be better, in colour. See below ...