The 'Worlds Smallest Film Festival' challenge was to shoot an ultra short film ( less then 3 minutes) using a smart-phone or tablet. My ultra short 'stop motion' film, (52 seconds) was shot on an iPod in the spring of 2015. - The 'theme challenge' this year was WATER. So, guess what I did??

NIFF FESTIVAL DATES: : June 18-21, 2015.
Expect a unique culinary & film adventure with exquisite food, phenomenal films, and stellar wines all in the heart of Niagara. The Niagara Integrated Film Festival (NIFF) is an unforgettable adventure in great food and phenomenal film taking place at all the top wineries in breathtaking Niagara Region.

Consider one of the four event 'packages': -

GALA - Experience a Hollywood premiere-style affair. The Opening Night Gala will take place at Peller Estates with a seasonally designed plated dinner and delightfully paired wines to kick off your NIFF experience. Fri-Sun night Galas will take place at Jackson-Triggs Winery with spectacular chef-attended food stations spanning the property. We'll have red carpets and talent to introduce the films and provide an interactive audience Q&A. Finish the night off at the complimentary after-party with a glass of wine!

FILMALICIOUS - It's dinner and a movie at its finest! Hosted at some of the most splendid wineries across Niagara-on-the-Lake and Twenty Valley, during this sensory experience guests will enjoy a sumptuous dinner paired with award-winning Niagara wines selected specially by the winemaker.

FILM FEAST - Film Feast shines the spotlight on the very best of food, film, and wine -- all combined to create a unique afternoon in the vineyards. Leave the tour behind and take a guided bus tour to some of Niagara's remarkable wineries. At each winery, guests sample a flight of vintages accompanied by exquisitely prepared hors d'oeuvres. What makes Film Feast unlike anything else is that at each winery you will enjoy the amazing short films selected from Canada's Not Short on Talent, a program imported express from the Cannes Film Festival.

SPOTLIGHT SERIES - Spotlight Series takes place at the Pen Centre in St Catharines and at the historic Seneca Queen Theatre in downtown Niagara Falls. The Spotlight Series Weekend Pass is your best bet to see as many films as you can from Thursday to Sunday for one low price! 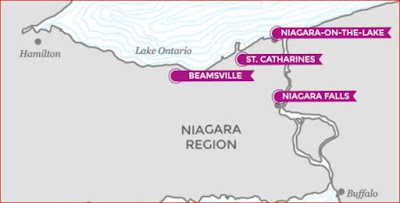