Thrilled to be included in the on-line art auction for the Dundas Valley School of Art this year, running from April 12th - to - the 17th. With another 3-week 'shut-down' imposed by the provincial government throughout Ontario, (effective Friday), it's becoming increasingly more difficult for traditional artists to show and sell their work locally.

(... FYI, the #NFT 'digital art' craze sweeping through the global 'screen-living' community is not, sad to say, doing very much for those who have long honoured the challenge - and commitment - to make actual physical objects to beautify and enhance public and private 'real life' spaces ... )

In any case, I have put up a small, framed painting of Lake Ontario. The viewpoint in that work is from the center of the lake - where waves, wind and the horizon meet ...

It is hoped this vibrant small painting will appeal to all 'lake-dwellers', especially fans of the #GreatLakes of #NorthAmerica.

Fifty percent - 50% - of the final auction price is earmarked for the DVSA school so that they can continue their GOOD WORK to encourage and develop artists in a broad range of disciplines throughout the Golden Horseshoe region of Ontario. 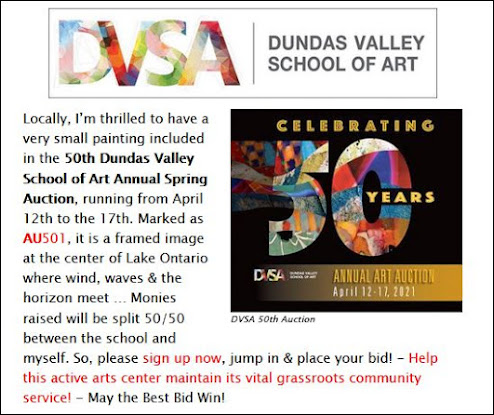 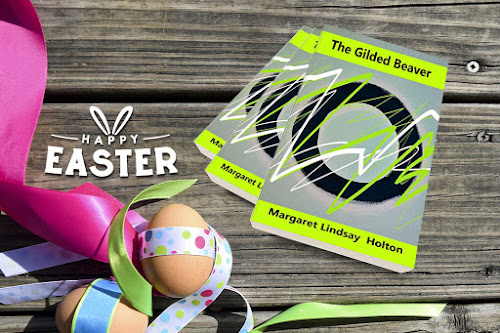 Families keep Humanity Alive.
Without them, we are cut-off from our species.
... Love your Family ...
Care for your Family.
Encourage Reading, at all levels.
Open Minds Expand through Exploration.
The two titles I am offering here are novels for mature readers.
The Gilded Beaver (Second Edition) and/or TRILLIUM.
(Women seem to prefer them more than men, but hey, that's up to you. )
The stories I share are intended to help you find your way ...
ENJOY! >LINK 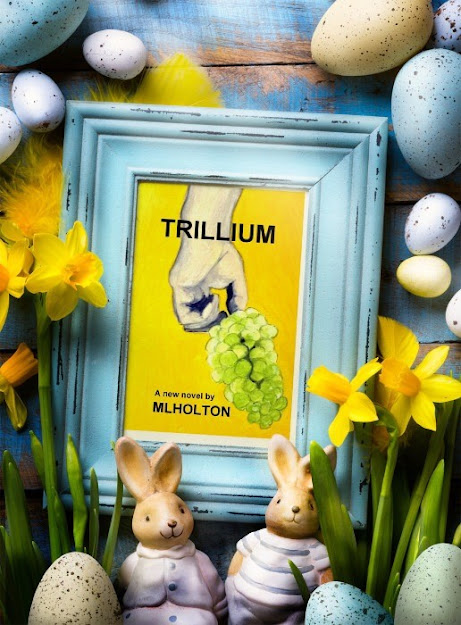 A Live-Chat About TRILLIUM

Oh dear. Must share a few more thoughts about 'video-conferencing' from an artist's perspective ... I know that it is increasingly common-place for everyone and their mother to engage in 'voice chats' over Zoom, Facetime and Skype, etc. It's so commonplace now, it's consider kind of ODD not too.

And yet, for me, this super-controlled, literal 'in-your-face' video interaction is wholly unsatisfactory as 'human communication'. It's not just the invasion of private space - as has so readily occurred over the COVID Lockdown - it is the screen's innate inability to really engage with the person you're chatting with. There is, quite literally, two screens between you.

Sure, you can see and hear each other through the screens, but what about all the other manifold physical senses and tangential happenings that naturally erupt when actually with another person?

As example, over the past year, I have attempted at various times to 'chat' with my dear old mum in this way. Yes, it certainly does allow us a chance to catch-up and SEE each other. But we both soon discovered a mutually understanding of the incredible VOID we were experiencing through the screen. Both of us sorely miss the spontaneity of the ever-capricious 'just-being-with-each-other-in-Time-and-Space' experience. Nothing can replace the actual synergy of REAL LIFE -- and humanity would be sorely mistaken to believe that 'screen chats' suffice - or that, "it will do".

For those who have no qualms about interacting through video chats with others, whether for private or public use, I do get it. It's easy, it's convenient. It gives you sense you are 'connecting'. You can 'zoom' in or out over vast distances. You can seemingly control the volume, lighting, backdrop and you can exit at Will, (unless you are a 'guest' on an interview!)

But, to be EXTRA clear, this is not what real-life surround-sound 'conversation' between living-and-breathing human beings is like, or about. So many of the delightful nuances of engagement are lost through this pervasive and invasive technology. So much is NOT seen, heard or felt through our screens. It's really just not Half as Good as the real thing! -- Really!

... Anyway, enough about why I loathe this controlled form of engagement ... Now, the juicy stuff!! 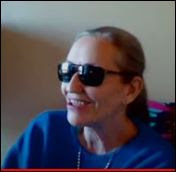 On Monday, I and #Dutch-#Danish-#Canadian, Jens Hansen, the talented #narrator of the #audiobook version of TRILLIUM, were interviewed on a UK-based Youtube station, 'Boomers on Books'. It was a huge opportunity to 'spread-the-word' about our combined effort on the TRILLIUM audiobook project, so, yes, I had to do it.

During the pre-live, prep period - when we were testing connections, lights, background and extraneous visuals - the loathing I hold for this kind of 'screen communication' began to manifest ... Every fiber in my being was resisting the necessity of the 'performance art' that had to ensue. (I am also very aware that I prefer being behind the camera, not in front of it.) Fundamentally, as I writer, I 'observe' while others 'perform'. Writers epitomize spectators. We are the All-Seeing Watchers. All this was swirling around in my mind as we got ready for the one-hour 'live' #interview ...

On the day of, I thought I was going to throw-up. I was overcome by a completely irrational fear that almost prevented me from joining 'in' to Vince's channel room.  -- What would others thinks? What would I think? Who would be judging? How would I judge myself? -- This reached a crescendo just a few seconds before 'air-time' ...

... As one long interested in the impact of screen culture on humanity, yes, I crossed the Rubicon ...

And, of course, it was 'performance art'. -- Later remarks that I looked "so natural", "at ease", and "comfortable" (while very kind and supportive) attest to that. -- Believe me folks, the whole thing was, from start to finish, 'performance art'. Some have said, "it's no big deal. You did it!" -"It's excellent & necessary promotion." "You're just selling your book!" Yes, yes, and yes, BUT ... I still loathe every single second of having to do it. And that, my dear friends, is why you will see little more of this #writer 'live', on big or little screens. 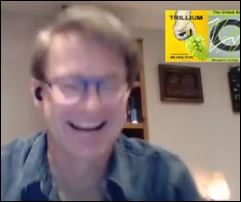 Now, let me add this link for the real #performer, the real #actor, in our midst. It goes without saying that I chose wonderful Jens for all the #acting abilities he so easily manifests during the interview: charm, wit, timing and an all-round good sense of fun.  As mentioned in the interview, it was during the taping of his STELLAR rendition of 'The Cremation of Sam McGee' that I first saw and heard the fantastic potential he had as a #storyteller. - Jens is a natural. Jens IS gifted. - And, you really should listen to the bravo 14.5 hour #performance he gives to TRILLIUM. It is outstanding!

Settle in for a thrilling, engaging and timely tale that spans 250 years of life on the Niagara peninsula. The #Ebook, #paperback and audiobook are now available in the States & Canada via  Amazon, or iTunes.  -- Plus, here are the United Kingdom links. 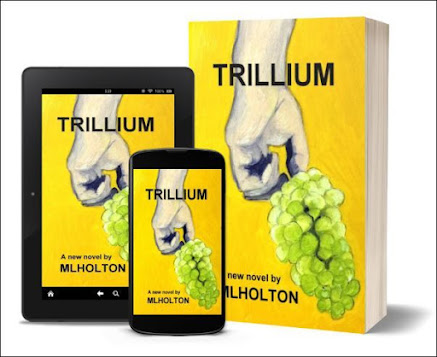 Delighted to have three of my older #poems - Shareware, Pond Life & Trading Post -  included in the '2021 Still Together' Anthology of Shorts, Edited by UK-based author, Tracy Hutchinson.

As the cover reads, "2020 has been a long year. And now we must look with hope to 2021.We hope for a vaccine that can return the world to normal. We hope for an economy that will heal quickly, avoiding the painful recession that has been forecast. We hope for people to continue to develop the sense of togetherness that has appeared this year. We hope that 2021 will be an easier and a better year than 2020 has been.2021 Still Together is an anthology to follow on from 2020 Together. This second anthology reflects the community spirit of 2020, where writers, artists and photographers, who like you, want to continue to help our Covid-19 heroes. 100% of profits from sales of this book will continue to go to NHS Charities Together.Lockdown, Covid-19 and change has happened this year. Learning to stay safe, and helping to keep other people safe has happened this year. ... And we hope that you will enjoy reading these short, family friendly creations, while also providing funds to help our NHS heroes.Together, we can still make a difference."

ALL proceeds go to support the tireless UK NHS - Help if you can, please.

Here's the Canadian Amazon link for the title.

A fantastic profile of the #audiobook narrator, Jens Hansen - (chosen for my third novel, TRILLIUM) - came out today on the front (and full page!) of The Hamilton Spectator's GO section.

Written by veteran lifestyle & arts columnist, Jeff Mahoney, Jeff really 'gets' the "debonair" character that Jens brings to the pages of TRILLIUM ... 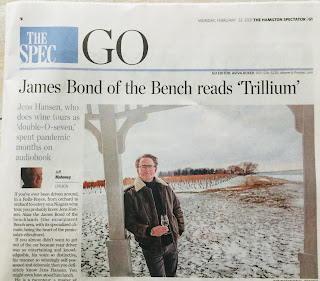 The article is a wonderful and in-depth coverage of a versatile actor whose first language is, surprisingly, not English.

As I explained to Jeff as background for the profile, I initially chose Jens because of his exotic life-and-lived experience from elsewhere on the globe. His cadences, tone and inflections add a rainbow of audio colour to the telling of the tale. So much so, Jeff gushes about his "great Niagara of Narration". -- Fine words indeed!

So, if in the mood to listen to a distinctive and beguiling voice for 14.5 hours, tune into Jens' "brilliant" rendition of TRILLIUM.  You will be alternatively amused, delighted, intrigued - and seduced. -- Promise!

TRILLIUM, written by Margaret Lindsay Holton, available on iTUNES -- or Audible. If you prefer to #read TRILLIUM yourself, download the ebook -- and/or pick up the 350+ paperback -- via Amazon.

Woorah! Followed-up by a nice 5-minute interview clip with Jens on 610 AM Radio #Niagara.

Delighted to have this wonderful post all the way from sunny #FLORIDA! Marcia Meara let me share the wonderful #voice of Jens Hansen on her comprehensive book blog. Dive in for a good read about what makes Jens soooo good for the 14.5 hours TRILLIUM #audiobook project. Tune into Audible, or  iTunes to have a wee listen to his stellar effort!