UPDATE:  It's so gratifying when various readers and reviewers compare TRILLIUM to the works of such accomplished authors as Isabel Allende, Gabriel Garcia Marquez, Edward Rutherford, and Diana Gabaldon. It helps me a great deal to know how my structured phrasings are impacting others. Thank you all for your on-going interest and support, and YES, as promised, the audio version is 'in-the-works' ... More coming on that soon ... mlholton, author. - Feb 4th, 2020

Blast from the Past! The Gilded Beaver by Anonymous, Reviewed by V.Cline Barton 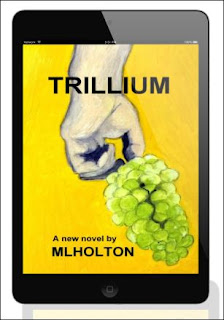 For a quiet Canadian writer working in the boonies, it is a delightful and slightly unnerving experience when a more prolific and socially active American author reviews - and then extols - one's lesser known work.

When that reviewing author then gives that lesser known work  another FIVE star review  - it is hard not to sigh in relief and immense gratitude.

Could any writer ask for more?!?

The reviewing author of my last two novels, Veronica Cline Barton, is a fertile writer of a charming cozy murder series that has her main protagonist, Gemma, bounce back and forth from the States to the United Kingdom. Integral to Gemma's evolving story is Veronica's on-going interest with FAMILY and FORTUNE - but on a royal scale! We intersect on those two points. As #writers, we are both fascinated by the vicisstitudes of FAMILY and FORTUNE in fiction - and real life ...


Since the very beginning of human history, family tribes have plotted to not only secure but expand their territories. Growth, let alone survival, has been achieved through numbers. Adding new members to any family invariably increases that family's material wealth and influence.

The most common method to enhance status and FORTUNE is to 'marry' into a FAMILY of greater means or status than one's own. If family bonds are very thick, the 'ritual' of marriage becomes a strategic move to enhance both wedding parties material wealth and power.

It is only in relatively recent times that LOVE - as a basis for marriage - has gained ground against the plotting traditions of Powerful Families. (Just ask the British Monarchy.) 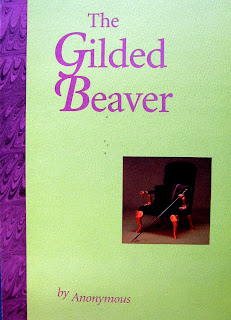 In Veronica's recent review of my second novel, The Gilded Beaver, she deftly highlights the slow evolution of the willful and creative protagonist, Iris Burdock, as she attempts to navigate the commercial world of FORTUNE. Iris, like so many of her hard-working female contemporaries, operates in the world of commerce without the traditional support of an ambitious or protective FAMILY.

As an independent woman, Iris must evaluate and assess a bachelor who has entered her working realm. It is not as straight-forward a business transaction as she initially thinks.

During her on-going assessment of his tastes and his way of life  - and without the wise or interfering counsel of FAMILY - Iris must chart her own course. She is eventually forced to ask herself what she really wants: is it FORTUNE? - Or is it really LOVE?

The Gilded Beaver by Anonymous won the Hamilton Arts Council 'Best Fiction' Award in 1999.
TRILLIUM , my latest novel, was a Finalist for the same award in 2019 ...

At the start of the New Year and New Decade of the 2020s, I realize that by the end of this decade I will be 75 ... This realization is a bit startling, primarily because I just bumble along doing what I feel I MUST do, creating what I feel I MUST create, somewhat oblivious to the passage of time ...

With this new-found respect for what is increasingly 'a limited time-frame', I have decided to post a project that I have been trying to get off the ground for over four years - but to no avail.

At this point, it seems unlikely to me that it will happen in my lifetime. So, for the record, I've decided to post the entirety of the 'Exhibition Proposal' entitled:

It is my sincere hope that in 10, 20, 30 or even 50 or 150 years from now, some soaring cultural hawk who is researching ... #whateverhappenedtoCanada ... will fall upon it. With some study, (no doubt through translation), they will recognize this grassroots contribution for what it is: - the development and manifestation of a thought-filled and curious girl/woman, who, whilst raised within certain pre-existing societal structures, quietly stood outside of those imposed expectations and profoundly understood that this #ONEEARTH - that we can see, touch and feel with our own vital living and breathing #beings - is our most precious & sacred communal #HOME.

By trying to 'own' everything, we have nearly ruined everything -  including the fresh water, clean air and good soil that daily supports us. Obviously we do so at our own peril.  But even more stupid then our relentless greed is our cruelty to other species. Our consuming presence is ultimately jeopardizing everything else on this finite, living and truly amazing planet. ... Must we BE such a Destructive Species?

So, that's the basic theme, observation - and question ...

Please note, there are likely better places to 'post' this document, but, frankly, time is getting shorter, and at this point, I'd just rather get it done and out there ...

If anyone is interested to pursue this Exhibition Proposal in the short term - ie. within the next five years - please print out the following and follow-up with me. After that, please contact my Estate Representatives who will be managing this blog. Also, kindly note, what follows is the Original proposal pitched to the Art Gallery of Burlington in early spring of 2017: it can be easily adapted to other spaces with some curatorial flair.

Thank you very much for your interest in my life's work thus far - and now, into the FUTURE ... Here's to a Bright New Decade! - mlh

Part 1 - A. Purpose of Exhibit:
- introduce the public to the breadth & depth of the #CanadianMaterialCulture creations by local Southern-Ontario-based #Canadian #artist, Margaret Lindsay Holton.


This retrospective will present more than five decades of #self-taught Margaret Lindsay Holton's paintings,  drawings, as well as samples of her Canadian fine furniture. It will consist of 100 of her most impressive works drawn from public and private collections, featuring her best-known pieces alongside those rarely seen.

Born and raised in rural North Burlington on a small sheep farm, Holton combined local flora & fauna iconography early-on in her Canadian fine furniture pieces made during the early 1980s to late 1990s. Her country roots also manifest her personal 'home-grown aesthetic' in her later photographic pinhole and photo-collage works.  Likewise, her 'grassroots' spiritualism manifests in her paintings produced over a 40 year period. Works on paper, canvas and board faithfully represent the deep roots of her geo-cultural origins.

Today, calling herself the only 'canajun' citizen in her playful - yet pointedly invented - 'nation' of #CANADADA, Holton continues to paint her provocative and signature 'naive-surreal-folk-abstracts' oil and acrylic paintings. Her graceful yet bold contemporary works also include representational imagery that reinforces the ancient paths of all humanity on the planet.


"All of us are the Children - as well as the Caretakers - of Planet Earth." - mlh

The exhibition celebrates this extraordinary artist’s life work of creativity, perspective and acquired knowledge. It showcases her deep love of the land, flora and fauna, as well as her enduring passion for the vivid and varying water-scapes of the Great Lakes of North America. All of her works are infused with a artistic and quasi-political 'synergy' that places her overall oeuvre among the most notable #Canadianartists of our times.


"In 2025, I will be a 70 year old artist living & working within the 'national' entity known to others as #Canada. My physical perspective is from the edge of a large lake, known to others as #LakeOntario. This lovely lake is part of a larger body of lakes, called the #GreatLakes. The Great Lakes are situated in the north-eastern part of the continent, known as #NorthAmerica. The lakes are seemingly split in two by what others call the national border between the United States of America and Canada. Only we humans, within the natural world, recognize these invented borders  ... The lake waters flow from shore to shore and know nothing of national boundaries. Birds migrate overhead, seeds float on the breeze and clouds float to and fro. It's a large canvas, constantly changing, constantly new and renewing ... The soft sweet waters drain down towards the salty sea, named the Atlantic Ocean, via a large river, called the St.Lawrence River. From this perch, beside the lake, I scan north, south, east and west, keeping an eye on all things - local, national and global. - My work represents my Point of View."-  mlh


Exhibition Schematic - in 3 ZONES
(Via Above Floor Plan above:  Zone 1 is on LEFT, Zone 2 FLOOR is CENTRE
& Zone 3 is on RIGHT)

" 'Canada' is an IDEA - moreover than a large land mass & political entity."- mlh

... 5 paintings chosen from FIVE decades, presented, mostly, chronologically ...
---NB: Items with asterisks have NOT been confirmed yet.

(** Note: Possible to combine the above two sections into 'one'. Review with Jeremy Luke Hill.)

Essays provided by contributors to MLH and/or her Estate. Production/Design of Catalogue by MLHProductions/AcornPressCanada and the Art Gallery of Burlington, Print run of 800 - 2000.   Note to Gallery: 'Honorarium' to be paid to all #authors relative to page count.
----
End of PART 1.

PART 2. is a series of visual thumbnails that support the above.
To better view the disciplines as outlined, enlarge the preferred thumbnail. 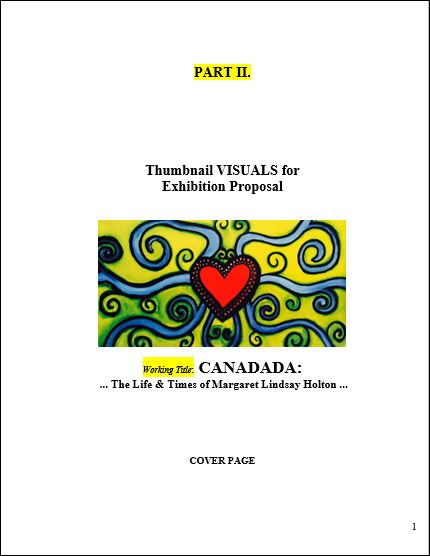 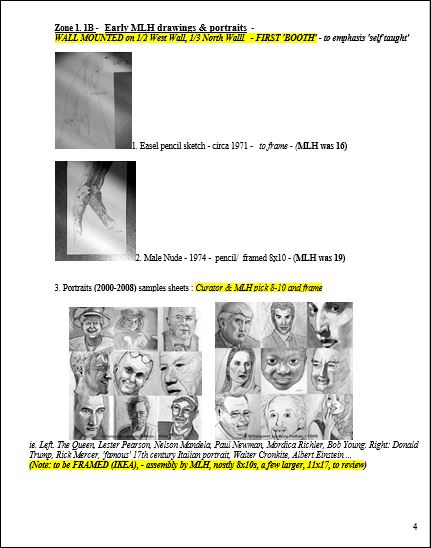 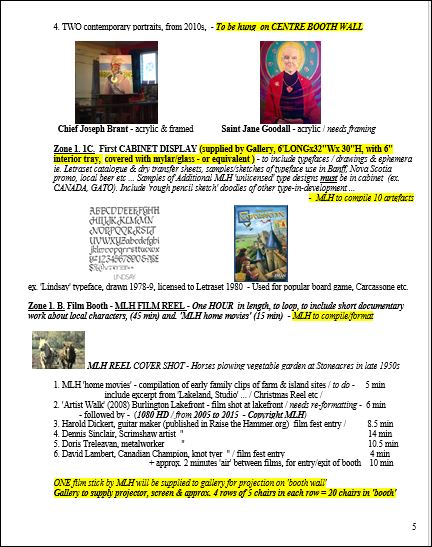 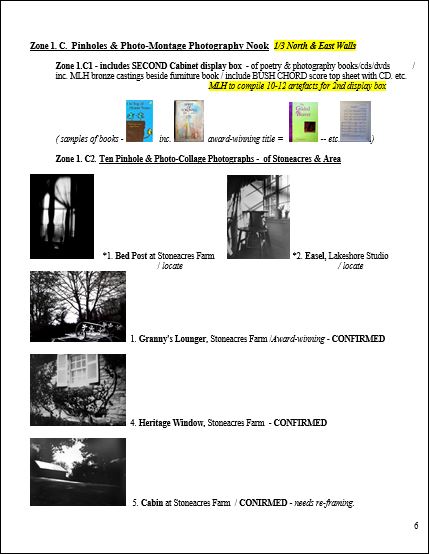 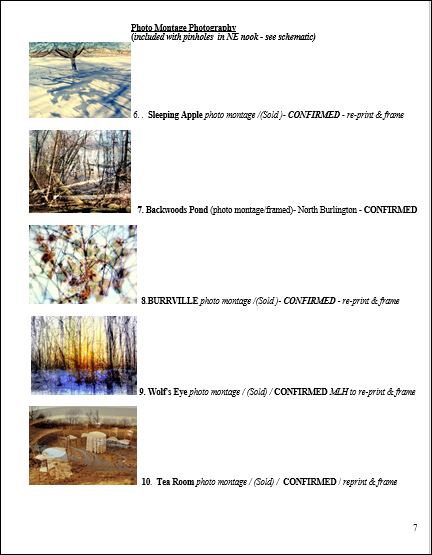 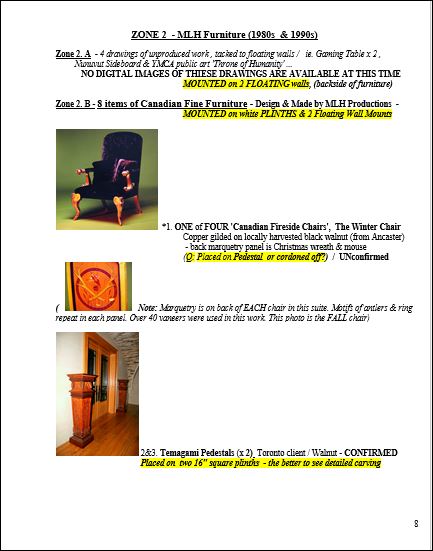 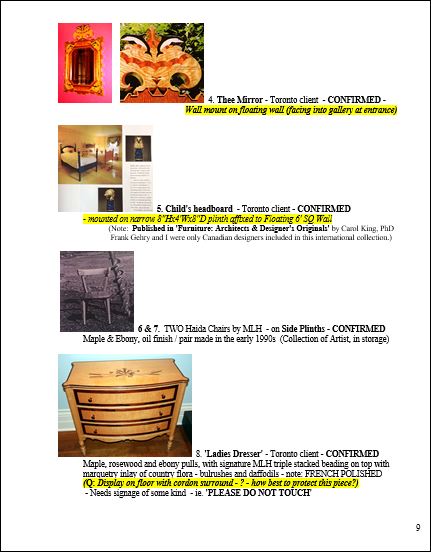 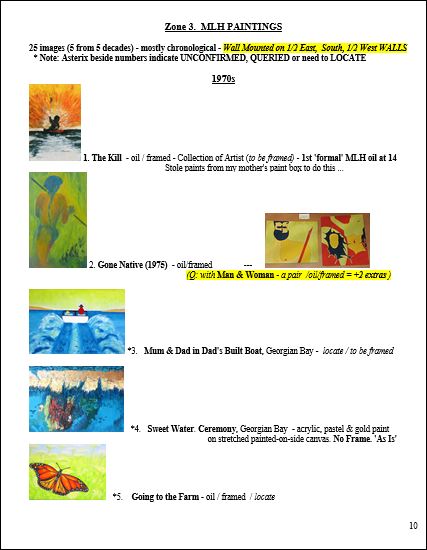 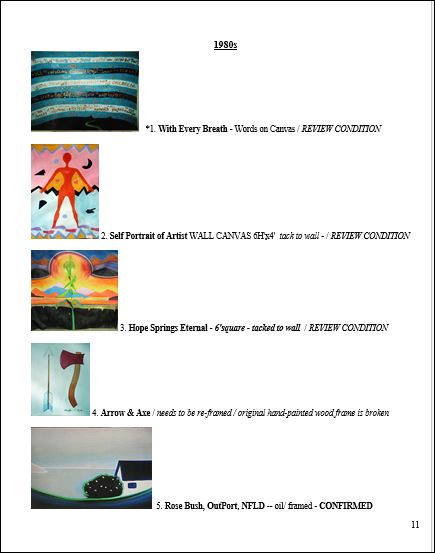 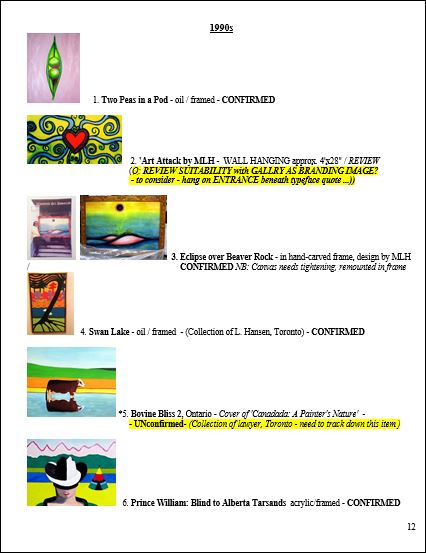 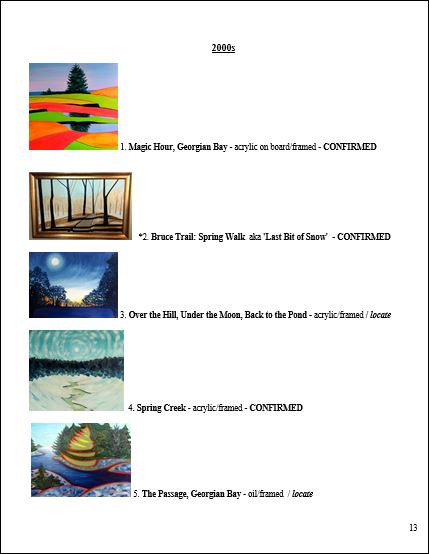 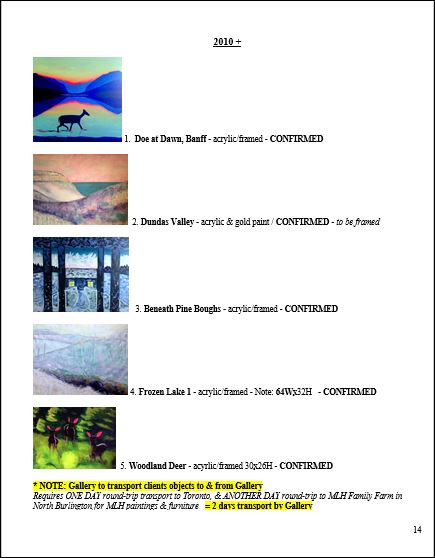 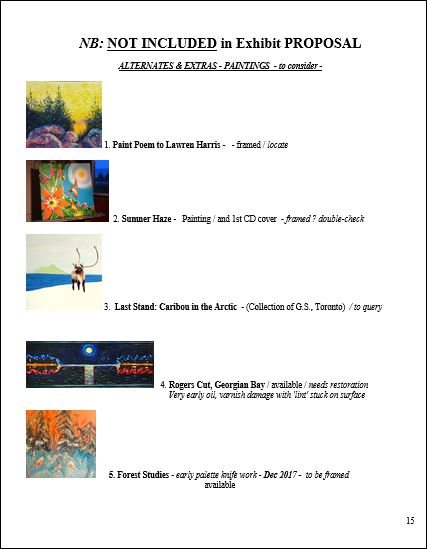