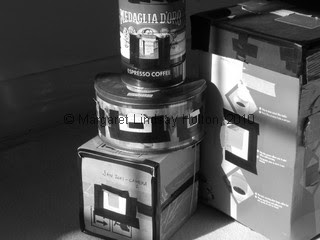 Pinhole photography is the oldest known form of photography on the planet. The earliest known use of this technique was in Asia around 500 B.C, and in the West, around 500 A.D. During the Renaissance it enjoyed a brief ‘resurgence’ as scientists and philosophers explored the emerging realm of ‘optics’.  Sir David Brewster, a Scottish scientist, first coined the phrase ‘pin-hole’ in the 1850’s.

Also known as a ‘camera obscura’, pinholes, without the use of lens or fancy gadgetry, lets a small pinhole of light into a completely blacked-out cavity. This incoming ‘pinhole’ of light creates a reverse image of what the pinhole is facing, in other words, a ‘negative’. Today, from this ‘negative’, a ‘positive’ print is pulled using conventional darkroom developing techniques. In other words, the ‘positive’ photo image is what you see as a ‘finished’ photograph.

I am fascinated that any ‘image’ can transfer without any mechanical intervention. The primary light source, (most often the SUN), simply silhouettes and ‘shadow creates’ the image on paper. Amazing.

I like how this process forces me to ‘slow down’ in the act and art of taking pictures. Pinholing is the epitome of ‘slooow photography’. An exterior shot, on a good bright cloudless day, can easily take 3-4 minutes of exposure depending on the camera I am using. (Note:  I only get ONE shot per camera!)  Interior shots can take anywhere from 10 to 20 minutes, again, depending on the incoming pinhole light source.

The pinhole itself determines the ‘clarity’ or ‘focus’ of the image. The rougher and bigger the pinhole, the more diluted or ‘softer’ the image. The sharper edged and smaller the hole, the clearer the ‘focus’. I admit that I pinhole somewhat organically.  I never use a light meter, rather I prefer to visually gauge the brilliance of the Sun reflecting off objects.

The pleasure of this technique is in the process itself.  By today’s digital & computer standards, pinholing is seemingly arcane and VERY labour intensive. Processing a single image can easily take up to 10 hours from the moment of exposure (creating the ‘negative’ on light-sensitive paper) to the pulling of the final ‘contact’ or ‘positive’ print.  Yet, oddly, TIME kind of dissolves when pinholing. The process forces one to be very attentive to the ‘here & now’. All becomes vivid, more immediate, more ALIVE …. It seems as though one is literally ‘dancing with Light’ … To my way of thinking, the final ethereal 'pinhole' image is well worth the wait ...

For 'visuals' - consider this series in the Fall-Winter 2012/13 issue of Hamilton Arts & Letters Magazine, and/or link to 'these'...