Recent photo digital works, in a collection entitled ‘Landscrapes’, by Harold Sikkema, are showing at the YouMeGallery in Hamilton until March 3rd. A friend and I went last week to consider this work and talk to the artist.

There is no question that these photo-manipulated works resonant on many levels. They beckon the viewer to ‘get close & personal’ enticing with a multitude of teasing visual ephemera that is both known and unknown. We see things we know, things we think we know, and things that we don’t have a clue what they are … Yes, the images engage and beckon.

That said, some are definitely more successful then others. I attribute this mostly to the clarity of the initial photography taken from the natural world, like this enjoyable one, Communio, available in a multitude of sizes: 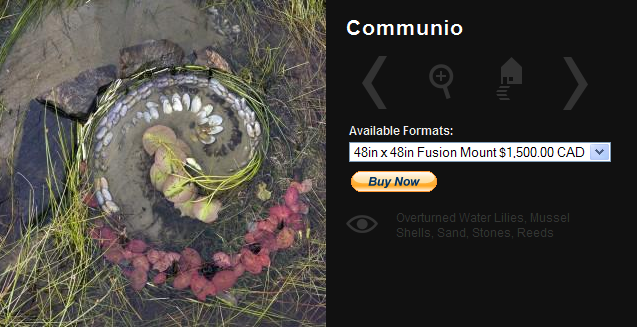 Cumulatively, these carousels of cacophonic imagery are ‘ordered’ through a carefully constructed imaginative maze that, if nothing else, make perfect sense to Harold Sikkema. Viewers will have to work a bit harder to ‘get it’ ... And therein lies some of the problem with Harold’s work.


There is no question that these recent photographs invite emotional and intellectual meditation, BUT at a certain point I wondered when he would ‘let go’ of ‘us’.  Each image is accompanied by an obscure title and accompanying poem that demand ‘attention’. It’s as though Sikkema INSISTS that we consider the title and poem BEFORE the visual – when, in fact, the visual ALWAYS dominates and clearly predates both the title and the poem. This insistence is counter-intuitive and creates a completely unnecessary ‘tension’. Truth be told, the tension is more aggravating then compelling. Rather then ‘allow’ a ‘flow’ between the subject and object, (ie. the viewer and the work), Sikkema has established deliberate ‘intellectual obstacles’ that viewers must battle through, before they can just ‘look’. This is further evident in the meticulous lists of objects and locations adjacent to each photo montage. You simply cannot LOOK without Sikkema ‘getting in the way’ … Consider this promo VIDEO.


It seems the artist doesn’t want us to merely LIKE each individual photo montage on its own merit, on our own terms. Instead, he works very hard at convincing us that his works are complex mini-universes that catalogue a ‘human-versus-nature’ continuum.  Likewise, at times, his language, when describing the computer-generated photo-montages, is vintage ‘artspeak’. He effusively defines - and defends - his photographs as ‘sculptural-like photo-tapestries’ …. ummm. ok.

Hey man, I’m still going to LIKE these photo-montages anyway.

When I inquired about his technique, Sikkema was forthcoming. He layers photo images using inversion & photo filters. Micro and macro images are superimposed one on top of the other that intriguingly (and convincingly) add depth and resonance. A close-up of faded driftwood lingers over a miniature savannah of meandering wildlife of - buffalo (?); a plastic (- broken?) baby doll is nestled in a indigo coloured - eggshell (-?) within the twirling helix of a shredded (-fluorescent?) tire; deer (-?) antlers shoot off a simulated globe, miniscule inverted farm fences linger like lingerie  – o’my : yes, these juxtapositions are beguiling.

Collectively, it certainly is an imaginative romp.

Still. I couldn’t help but feel – and think – that, aside from a lot of evident time and effort, there was a LOT of gimmickry involved in the composing and the making of these digital images. Harold was proud to point out the gigabit capacity of his computer and his multiple hard drives.

It sort of begged the question: what came first, the computer or the ‘vision’? In other words, could this 'vision' hatch - without the computer?

All told, Sikkema is using photo-computer technology to ‘tell his story’, and, mostly, he does a very good job of it. For now, we’ll overlook his inclination to be a bit heavy-handed with the 'public’.

We LIKE your work Harold. Seriously. You don’t need to justify - or amplify - your SELF in the accompanying minutiae. It detracts and, too often, obfuscates.

Even so, I do foresee that Sikkema will do very well with this small body of work, short and long term. What remains, of course, for all of us, is The Future …

How his images are built, sort of: 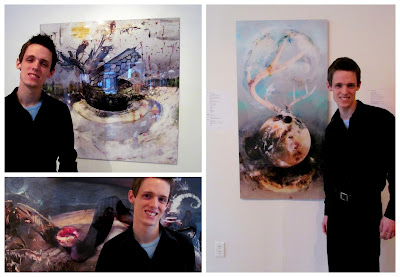 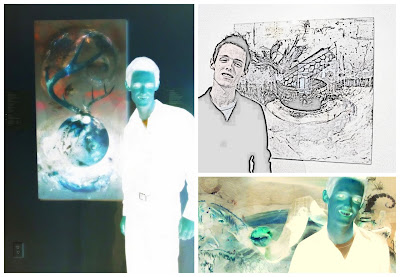 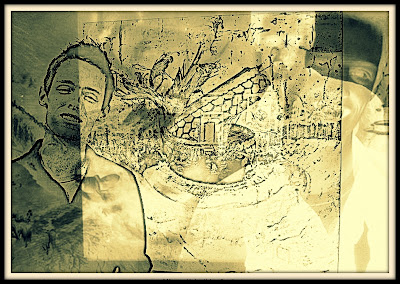 p.s. Harold just provided this 'alternate' promo VIDEO
It IS much better then the first ... 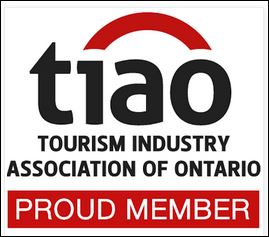